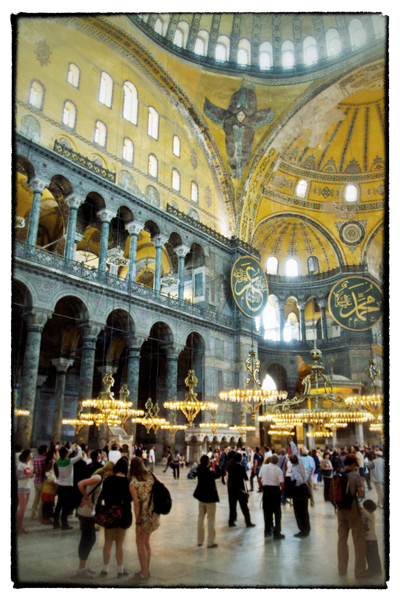 Inside the Hagia Sophia in Istanbul. Photo by David Lansing.

Sidar took me and two friends of his from Romania, Gimina and Delia, to the Hagia Sophia—the “church of holy wisdom.” Such a fascinating strutcture. Beautiful as both the Orthodox church it was and the mosque it became. Much has been written about Mustafa Kemal Ataturk, the father of the Turkish Republic. Following WWI, he did much (often in a brutal fashion) to drag Turkey kicking and screaming into the 20th century. It was Ataturk who convinced Turks to turn their back on the East and turn their vision to the West. The fez was outlawed. Ottoman script was replaced by the Latin alphabet and a new Turkish language. Schools and courts based on religious laws were abolished and, in 1928, a new civil constitution was recognized.

He also marginalized minorities in the country (although the Kurds have a different name for it: genocide). Over a million Greeks were sent packing back to Greece, their houses and businesses burned down or confiscated.

So, what does a man like Ataturk do when Christians clamor for restoring the Hagia Sophia to the church it once was while Muslims demand that it remain a mosque? He basically says a pox on both your houses: The Hagia Sophia will be neither a church nor a mosque. It will be a museum.

This is, perhaps, one of the benefits to being ruled by a strongman. There is no discussion of the issue. Elsewhere one faction or the other would have agitated for years and no doubt blood would have been spilt in the streets of Istanbul over whether the building should be a church or a mosque. But when Ataturk said the Hagia Sophia was going to be a museum, that was it. End of discussion. And in hindsight you’d have to say it was a brilliant solution. Now if only he could have been as sensible solving the problem of Kurdish independence.