The Air New Zealand flight from Auckland comes in tonight to whisk me away (supposedly) at 2:40 in the morning. I’m sad to go. When I arrived here two weeks ago—in total darkness, with no electricity at the Matavai or anywhere else on the island—I was thinking, Christ, I’ll never be able to stand a day here let alone two weeks.

Not so. I’ve rather fallen in love with this disheveled Garden of Eden. Even though it’s hotter than hell, the food is awful, and my hotel room—the best on the island—wouldn’t meet decency standards for a Motel 6. I don’t know why, but being on Niue has made me happy. Actually, happy isn’t the right word. More like serene. And I am not a serene person.

At first things like the only market on the island being closed on weekends drives you crazy. And then somewhere along the line…you let go. Maybe the little dumpy place with two computers in a stifling hot room—the only place to do e-mail on the island—will be open when it’s supposed to. Maybe it won’t. No matter. Maybe the Katuali coffee house will actually have coffee tomorrow. But probably not.

You stop expecting things to be the way they are at home. You take a shower not knowing if there will be any hot water or not and realize it doesn’t really make any difference. You go to bed wondering if the air-conditioning will go off in the middle of the night for lack of electricity. You realize that the dolphins will show up when the dolphins want to show up. And not a minute before.

Such is life on Niue. And that’s just fine. 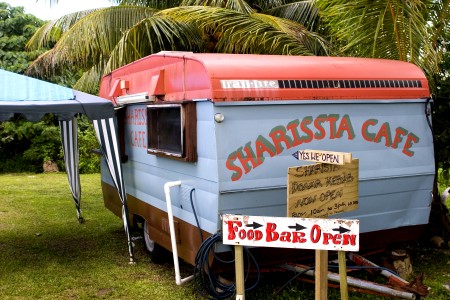 For instance, there’s the Sharissta Café. I can’t tell you how excited I was to come across this ancient, faded Trail*Lite trailer on the outskirts of Alofi and how I planned my entire day around having a lunch of donar kebabs as this fascinating looking eatery. Only problem is that, despite what the wooden sign in front always said, every day I went by Sharissta and every day it was closed. For two weeks. Had Sharissta packed up and moved back to Samoa or something? Was he or she on vacation? I’ll never know. At first, it all really annoyed me. Especially the “YES WE OPEN” sign. Then, for some odd reason, I started taking comfort in the fact that it was just there. And closed. I’d drive by it every day and think to myself, “NO WE NOT OPEN.” And I’d laugh about it. 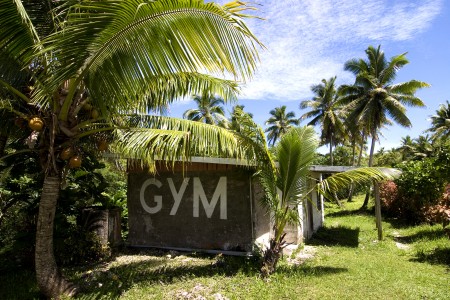 Then there’s the Niue Gym. Unlike Sharissta’s, I never had any expectation of the gym being open. And it never was. Instead, it just became a repository for my wicked imagination as I tried to imagine just what sort of equipment might be in this odd little shack in the jungle and who, exactly, its customers might be. The church ladies from Tamakautoga doing pilates? Bare-chested fishermen pumping weights? Taso Tukunou, the church bell toller, riding a stationary bike while listening to rap music on his iPod?

And then there’s the Coconut Stop, a little thatched hut on the north end of the island near Matapa. There were a couple of things I liked about the Coconut Stop. First, the idea that on an island where coconuts seemed to plop heavily to earth no matter where you were, someone had the entrepreneurial spirit to open a stand and try to sell these giant nuts. Perhaps because they were free and easy to find everywhere I went, I badly wanted to buy one here. I wanted to meet the man or woman that was optimistic enough to set up a roadside coconut stand. But, alas, there was never anyone there (though if you walked two minutes into the jungle you could pick up all the coconuts you wanted). 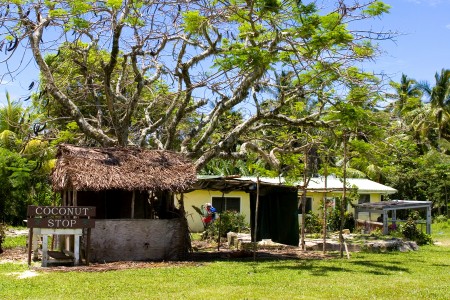 I also liked how professional the sign was. Like maybe they’d gotten support from the Niue government or something. “Hey, why don’t we open a coconut stop on the north end of the island and get John Halapalapa to sell coconuts there to tourists? All in favor, say aye!”

Obviously it didn’t work, but, hey, they tried. Which, it seems to me, should be the island’s motto: It May Not Work—But We Tried.

I’ll take that spirit off with me to Lanai where I’m headed next. In search of more island culture.