Looking for the Old Presbytery in Kinsale 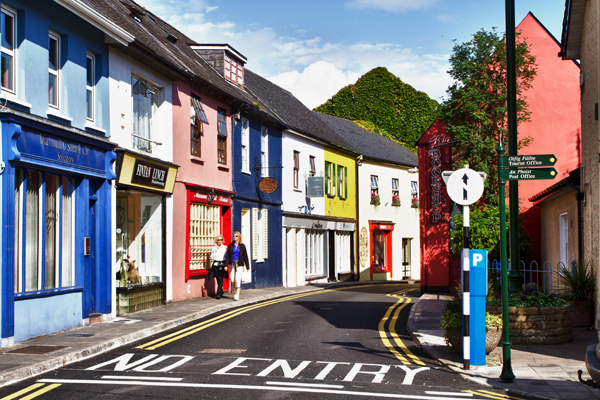 Headed the wrong way up a street in Kinsale. Photos by David Lansing.

We should stop in the tourist office, I say to Mr. Lynch as we slowly make our way up the old Pier Road in Kinsale.

Whatever for? asks Mr. Lynch. I’ve been here before. Besides, the whole town is nothing but three short blocks. You could walk it in less than five minutes.

Yes, well, but wonder if our hotel isn’t exactly in town? What if it’s somewhere out in the boondocks?

It won’t be, says Mr. Lynch confidently. I specifically requested a hotel that was within walking distance of the town.

I still say we should stop at the tourist office and get directions. It’s right on the corner here. You can stay in the car and I’ll just run it. Only be a second.

Still grousing, Mr. Lynch pulls in to the public lot behind the tourist office and I pop out of the car. A fine light mist has just started to come down.

Can you tell me how to find the Old Presbytery, I ask the young woman sitting behind the desk in the empty office, her hands folded on her lap. She jumps up from her chair and uses a pencil to point out the window. Just up the street to the top of the hill, she says. Near the Desmond Castle.

Lovely. Have you got a map?

Yes, she says, but you don’t need one. It’s right there.

Well, maybe a map for wandering around the town later. She reaches for a stack of folded maps on her desk, opens it up, and uses a green pen to mark the route from the tourist office up Market Quay to the Presbytery. Simple as pie, she says, handing me the map.

The mist has turned to cold rain. The wipers only partially mask Mr. Lynch’s bored face behind the fogged windshield. Well? he says when I get in.

Make a right at this corner and then a left up Market Quay, I tell him. It should be just a couple of blocks.

The wet map open on my lap, I trace the route with my finger as Mr. Lynch heads up the hill on Market. We come to a one-way street and, going the wrong direction, are forced to go down a narrow alley that might or might not allow cars. The lane dead-ends. Back part way and then a turn away from the harbor and suddenly we are on an unmarked road heading down the backside of the hill.

I think we’ve gone too far, I tell Mr. Lynch. The rain has increased. Fat plops smack the windshield making it hard to see.

How can we have gone too far? You said it was just up the hill.

Yes, and now we’re going down the hill.

Didn’t she say it was by the castle? Look for some ruins.

There’s a tower up ahead, I tell him. That must be it. But it’s not a castle. It’s a church. St. Johns. Listen, I think we should head down the hill back towards the harbor.

We drive for several more minutes. No idea where we are. How can we be lost when you could see the hotel from the tourist office? It’s a mystery.

Now the rain has stopped. The sun is back out. Blue skies. What a strange country. You get several seasons of weather all in twenty minutes.

Stop a young woman walking her dog. Can you possibly tell us where the Old Presbytery is?

She doesn’t say anything. Just points across the street. To a white building with a red door with a sign next to it: The Old Presbytery. Ah. Seems we are there.