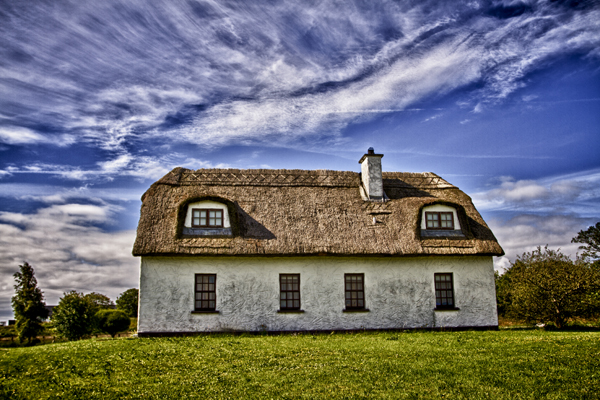 I’ve been blaming Mr. Lynch’s driving for our navigational problems but it’s me that gets us lost trying to get out of Blarney. How can you get lost leaving a village with only one road in and one road out, you ask? Well, it’s not easy but I manage. The thing is, there are two roads headed west towards Killarney, where we’re headed. One is well south of Taiscumar Loch (really a reservoir) and is the major highway; the other closely follows the north shore of the lake and is nothing more than a two-lane country road.

I’m suggesting we take that but the thing is, once you get out into the country there are all sorts of little lanes that split off here and there, few of them marked, and it’s not at all difficult to suddenly find that you’ve passed some village church and the old cemetery and are now out in the country where you’re likely to see only cows and sheep and the odd thatched cottage out in the middle of nowhere (my gawd, says Mr. Lynch as we slow to have a look at an old one-room stone house. Do people really still live in those?). Are we going north or west? A little of each it seems.

Mr. Lynch is driving so slowly that even the oul langer in the rusted out truck behind us is feebly honking his horn. Mr. Lynch pulls to the side and the oul bastard gives us the finger as he goes by. Well, that’s nice, says Mr. Lynch. What would his mother say to that?

We pull into the next cemetery we come across to turn around. And back down the country road we go, passing the same bored looking cows and the young lad pedaling the bike we passed twenty minutes ago. Never mind. We’re in no hurry. We’ll get to Killarney when we get there. That’s the thing about Ireland: It is always waiting for you.