Madrid: In search of a Starbucks 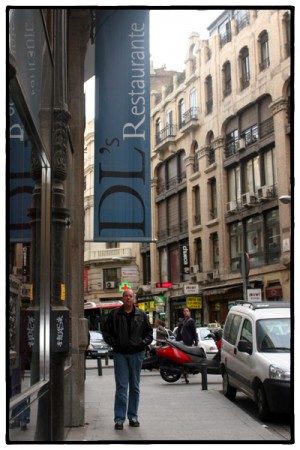 A sad man in search of coffee in Madrid on a Sunday morning. Photo by DL.

Sunday morning I got up early and checked out of the Hotel De Las Letras. Eva was coming by about 9 to take me to the Ribera del Duero wine region about 150 Km. away. Since I had about half an hour until she arrived, I asked the clerk at the front desk if there was a café or something along Gran Vía where I could get a coffee. She looked at her watch and huffed. “Not this early,” she said.

“Wait, you mean there’s nowhere in downtown Madrid where one can get a cup of coffee to go on Sunday morning?”

“Not this early,” she said. “People are still coming home from last night.”

And it was true. I walked for blocks up Gran Vía and saw dozens of tired looking revelers looking like vampires afraid of the sun but not a single café where I could get a latte. After walking for about five blocks, I did come across a Starbucks. But it wasn’t open. Too early, I guess.

I walked back to the hotel and went around the corner to DL’s, the hotel’s stylish restaurant (that I like to think is named after me) which was just setting up their Sunday buffet. I asked them if it might be possible to get a cup of coffee to go. Was I eating here? they asked. Sadly, no, I told them. I was just hoping I could get a cup of coffee. To go. The waitress said, “One minute, please.” She went off and spoke to a manager. The two of them looked at me while discussing the problem. Eventually the manager came over and asked if she could help me.

“Yes, I’m checking out of the hotel this morning and was hoping I could get a cup of coffee to take with me as a friend and I are driving to Ribera del Duero.

The manager disappeared. Five or ten minutes later, the waitress was back. With a water cup-sized Styrofoam cup. Of lukewarm coffee. I thanked her and paid. When I got back to the lobby, Eva was sitting on a couch. “Where have you been?” she asked. I told her I’d been looking for coffee. For 45 minutes. “Good,” she said. “Did you bring me one?”

I smiled and handed her the cup. “This is yours,” I lied. “I had mine back at the restaurant.” She thanked me and we left. For the long drive to Ribera del Duero. Sans coffee.