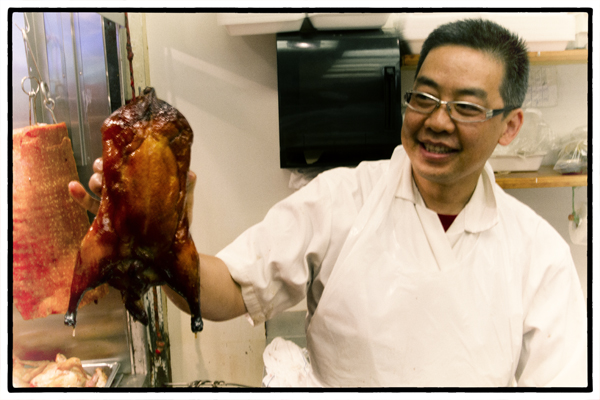 I don’t know where Mijune puts all the food she eats. I really don’t. I mean, she can’t weigh more than 80 pounds yet she eats more than me. Way more. There was this time when she took me to the Richmond night market and we ate at ten different vendor stalls. Afterwards, I just wanted to find a patch of lawn where I could pass out. But then Mijune says, “Do you want to go to dinner with me?”

Whatthehell? I thought she was joking. But, no, she said she actually had two more dinners to go to that night. Unbelievable.

So yesterday after a huge lunch and then a stop at the Parker Place Mall for some dragon’s beard candy, we’re headed for the door when Mijune spots one of her favorite BBQ places.

“I know this place,” she said. “Great roasted pork.”

I told her just looking at the pigs hanging in the window was making me ill.

So we stand in line with a half dozen other people outside Parker Place Meat & BBQ and when we finally make it inside the little store she starts yacking to the guy chopping up a roasted pig in Cantonese and the next thing you know, he’s scooping up a container full of crispy skin pork…and then another container of char siu…and then another container of soy bbq duck. Mijune must have at least three pounds of food in her arms.

“Let me pay for this,” I say, grabbing my wallet. But the guy won’t take my money. Seems Pork Boy has a thing for Mijune. It’s all on the house.

Now, I assume that Mijune is going to take all this food home and share it with eight or nine people for dinner. But Mijune grabs some napkins and forks and heads for an empty table in the food court and soon we are munching away on the crispy skin roasted pork, which has that nice crackling on the outside and is all moist and sweet on the inside, and the sweet, honey-tasting char siu, as well as the salty succulent duck. I can’t even believe I’m sitting there eating it. But I am.