When I first rented my little house on Aldama I wondered if perhaps a month wasn’t too long. Now I realize it was not nearly long enough. And I am not ready to leave San Miguel.

So over the weekend I have moved into a magical little B&B called Casa Luna Pila Seca. When I arrived Saturday morning, the owner, Dianne Kushner, was in Guanajuato for the day, having left instructions with Basi, the maid, to put me in Escondido—the “hidden” room, which is tucked into the back corner of the courtyard and where I have my own fountain lined with blue tiles and topped with a stone carving of a woman rowing a lion in a canoe. 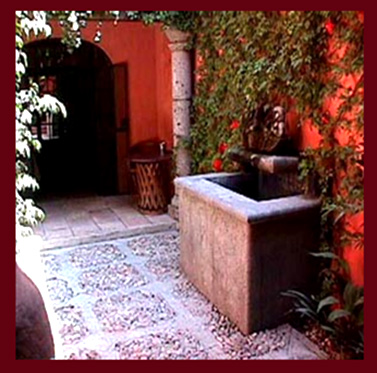 Outside my "hidden" room at Casa Luna.

Escondido has saffron-colored walls, paver tile floors, and a brick ceiling. Across from my bed is a small fireplace and in the hearth, in place of firewood, four votive candles. An embroidered wall hanging made by Chichimecas women in the impoverished pueblitos near Guanajuato hangs over the fireplace. There are nine panels—like individual retablos—each telling a little story and giving thanks to the Virgin.

Thanks to the Virgin for curing her husband’s foot.

In the afternoon, I walk down to El Tecolote (The Owl), a bookstore on Calle Jesús, to look for something new to read. I’ve been reading Loverboys by Ana Castillo, a collection of short stories, but it is not very good or perhaps it just isn’t what I was expecting. I pulled it from the Latin writers section at El Tecolote hoping to be immersed in tales of Mexico.

“Seductive…full of infectious vigor,” the cover proclaimed. But what I got were stories about a bi-sexual Latina from Chicago.

Since the bookstore buys used books, I brought in Elmore Leonard’s Cuba Libre which I’d finished several days ago. But they’re not interested.

“No one wants hard cover books,” says the woman who owns the store. “Too hard to travel with, too hard to read in bed.” Besides, she’s never heard of Elmore Leonard.

How can you own a bookstore and not know Elmore Leonard? Even in San Miguel.

I tell her the book was a NY Times bestseller and got wonderful reviews. She sighs and takes it from my hand, turning it over from front to back several times as if it were a piece of fruit she was considering buying.

I don’t care. Frankly, I’d have given it to her for free. Just so her customers have something to choose from besides the row after row of John Grisham and Stephen King nonsense. Today Elmore Leonard, perhaps tomorrow F. Scott Fitzgerald. I’m sure she’s never heard of him either.