Macduff, his unkempt hair flying in a stiff breeze, guns the silver Jeep out of the rental car lot in Lanai City, ignoring the speed bumps, and, wheels squealing, pulls onto the narrow two-lane blacktop that constitutes Lanai Avenue. “What should we do first?” shouts the mottled-faced photographer as we pass dangerously close to a little pig-tailed girl zig-zagging on a rusty bike alongside several meandering dogs.

“I think we should check into our hotel, maybe have some sort of  tropical cocktail, and have a lazy walk around town before dinner. You know, get the lay of the land and all that.”

Macduff shoots me a look as if I’m quite mad as my Jeep, which foolishly I’ve allowed him to drive, zooms past our digs, the Lodge at Koele. From the quick glimpse I’m accorded, the Four Seasons resort looks regal and inviting in the late afternoon light, just as it did in the brochure they sent me, the sort of place where one could sit peacefully in a wicker chair on the veranda and, as the copy reads, “Relax at the end of the day with a Lava Flow or Ship Wreck cocktail.” No idea what those might be, but I’m willing to find out. 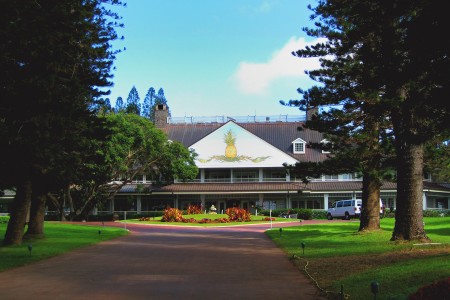 The Lodge at Koele photo by David Lansing

But it’s a moot point as the Jeep goes airborne over a slight rise in the road and the hotel, with its 10-foot tall mural of a pineapple over the entry, vanishes behind a row of swaying pine trees.

“You missed the turnoff,” I shout.

“The light, the light!” Macduff screams through the wind. “Look at the light! We’ve only got an hour or so…must…hurry!”

Macduff stares at the map on his lap while steering with his thighs. The Jeep veers off the highway and onto the red cinder shoulder. Rocks fly. The Jeep fishtails. Three or four wild turkeys, which had been peacefully pecking at insects along the side of the road a few minutes ago, hurl themselves recklessly into the thick undergrowth, terrorized beyond belief. Macduff mutters an obscenity at the fleeing birds, shoves the map between his legs, jerks the car back onto the road, and smiles at me, completely ignoring our near-disastrous brush with death.

“I think there are petroglyphs somewhere over there,” he shouts, stabbing at the flapping map with a stubby finger as the Jeep teeters, like a drunk, on two wheels. “Imagine—petroglyphs!”

I grab the map out of his lap. “You drive,” I tell him. “I’ll navigate. And for godsakes, slow down!”

“Hah!” he says, yanking the wheel sideways as we go off the paved road and onto a rocky dirt road with a sign that says “WARNING! Deep Sand!” This must be one of the roads Shantell had stamped NOT ACCESSIBLE.

”Look,” I tell Macduff as we plow through a sandy pothole, “it says the road is closed.”

Macduff gives me the stink-eye. “Only to mere mortals,” he says. “I’ve driven Jeeps on trails only a donkey could muster,” he says, and then goes off on some story about a trip to Tonga or someplace where he navigated a 4-wheel drive vehicle across a pontoon bridge made out of coconuts. “Now that was a nasty road,” he says, delighted with himself. “This is nothing.”

And with that, Mr. Toad veers off the road, barely avoiding a rock at least a foot-high, and into the bush where we proceed to plow down a field of waist-high ferns. “Hang on!” he warns me. “It could get interesting!”

I fear he is right.