Neruda, Rivera and the Medusa

On a whim, I stopped by the Museo Neruda, better known as La Chascona, the odd treehouse-like Santiago home of Chile’s most famous poet, Pablo Neruda. I had been wandering around the neighborhood of Bellavista looking for a little shop Liz had told me about, Emporio Nacional, hoping to buy some merken or perhaps a bottle of Chilean olive oil (which is quite remarkable) only to find that the store was closed. Rather than immediately take a taxi back to my hotel, I decided to wander around the neighborhood and quite by accident came upon La Chascona. 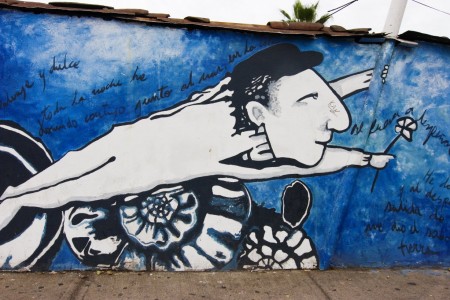 Our guide was a young college-aged woman named Alejandro. In the courtyard behind the main part of the house, she told us that Neruda moved to La Chascona in 1955 with the woman who was to become his third wife, Matilde Urrutia, while still married to his second wife, the painter Delia del Carril. La Chascona was Neruda’s nickname for Matilde and referred to “her rebellious red hair.”

Then Alejandro took us inside one of the buildings, constructed like a lighthouse, to look at a painting by the Mexican artist Diego Rivera (Frida Kahlo’s husband) called “Medusa Matilde.” According to Alejandro, Neruda quite liked the painting; Matilde, not so much. Which is understandable considering that in Greek mythology Medusa is a beautiful maiden with the ability to turn men into stone. A decade or so before Rivera painted Matilde as Medusa, Sigmund Freud wrote an article suggesting that Medusa was the “supreme talisman who provides the image of castration.”

Was Revera aware of this Freudian interpretation? Impossible to know. But, according to Alejandro, not everyone was thrilled when Neruda abandoned his painter wife (who was a decade older than him) and took up with the much younger Matilde, a singer. One of the more interesting things about the painting is that Rivera hid the profile of Neruda in the unruly hair on the right side of her head. I don’t know how well you can see it in this photo (which I had to take on the sly since it is forbidden to photograph inside the house), but if you move in a straight line from the eye on the right, you’ll see his lips and from there it’s not hard to make out his chin, protruding nose, and a single eye.

Whether Revera was a fan of Matilde or not, she was definitely an important muse to Neruda. Probably his best-known book of love poems—One Hundred Love Sonnets—was written for her (though he withheld publication for a number of years to spare the feelings of his previous wife).

He’s no Neruda but he’s definitely a romantic.