Like most everyone else, Mexicans are excited about Obama (let’s face it—after 8 years of The Decider who isn’t just a little Bushed?). The photo below is of a mural, not a poster, painted on the wall of Burrito Revolution in Sayulita, a little surfing town about 45 minutes north of Puerto Vallarta. 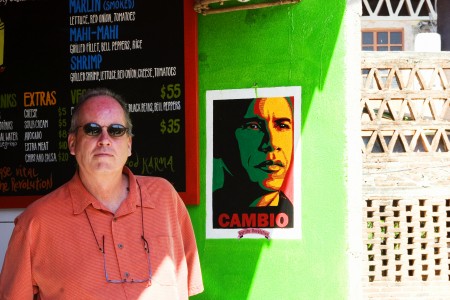 Frankly, the mural is better than the burritos. Still, even though they may be some of the most expensive burritos in Mexico (I mean, come on–$5 or $6 for a burrito?), there’s always a line outside this place because it’s on the main drag and just a couple of blocks up from the beach. 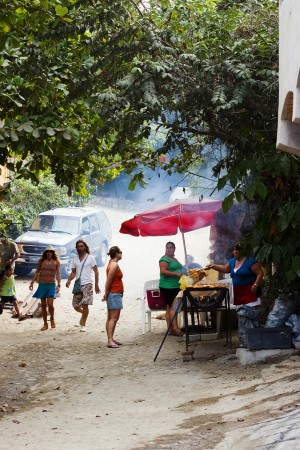 If you make the effort to cross the plaza and hike up a little hill, you’ll find a couple of women grilling chicken on the street. For a buck and a half you get the most awesome pollo taco you’ll ever have. Then you go into the family home where they’ve set up a couple of tables and their kids—maybe 7 or 8 years old—will bring you a Fanta or a Pepsi plus some killer homemade hot sauce that will definitely clean your sinuses out. Street food. And true cambio from the Americanized crap at Burrito Revolution.