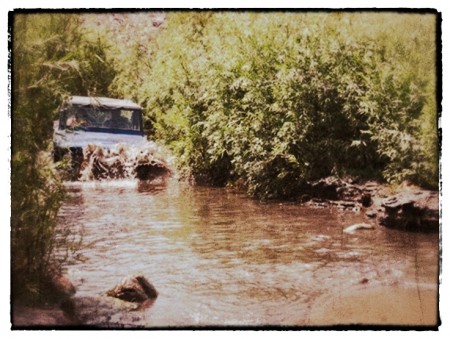 Attempting to cross the creek in Anza-Borrego’s Coyote Canyon.

Change of plans. Instead of going to the old calcite mine, “Borrego” Paul decides he’s going to take us to Coyote Canyon which, he says, isn’t near an earthquake fault zone, “it’s directly on it.” That’s why there’s a year-round creek that flows here in the desert. The creekbed follows the fractured rock of the San Jacinto fault zone which separates the mountain ranges that run through Anza-Borrego, the San Ysidro on the southwest and the Santa Rosa on the northeast.

“Borrego” Paul’s intention is to show us this unusual riparian wetlands which support dense stands of willows as well as cottonwood trees, acacia, and California fan palms.

We’ve made two crossings through the creek without any problem, but it’s when Paul decides to attempt a third one, in water a little deeper and wider than the others, that his Jeep, Ol’ Paint, up and dies.

“Come on, baby,” he says, trying to sweet talk her into moving. But Paint will have none of it. Standing up to her headlights in murky green water, she wheezes and backfires but refuses to move. Meanwhile, water is quickly seeping into the car from underneath the doors. We are in the middle of nowhere, approximately 6 miles away from the nearest paved road, on a blistering hot day with a dead vehicle.

“Well, boys,” says “Borrego” Paul, jumping out of Ol’ Paint and into the bug-infested green water. “Looks like you’re going to get more of a desert adventure than you bargained for.”

While Dale and I scratch our heads and wonder what to do, “Borrego” Paul grabs his cell phone and heads back down the road a mile or so to a high point where he thinks he might be able to get reception. An hour or so later, Paul’s wife, Sandy, has come to our rescue, pulling us out of the creek. After letting Paint dry out for half an hour or so, Paul gives her another go and she starts right up. In a two-car convoy, we head out of the desert as the afternoon draws long. When we come to the creek crossings, “Borrego” Paul pats the dashboard and talks the Jeep through the stream.”

As we pull into Borrego Springs, the sun just setting, “Borrego” Paul idles up in front of a local bar and offers to buy us a beer. “Or,” he says with a mischievous grin on his face, “we could head out into the desert with the lights off and see what we can find.”

Ten minutes later we are flying across a dry sand wash heading for the open desert with no particular destination in mind. Another adventure about to begin.