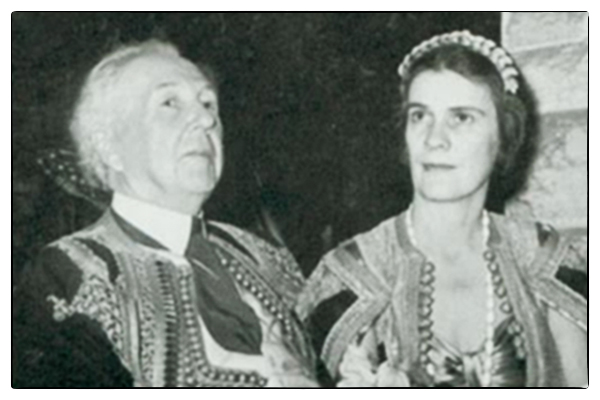 It’s hard to know what to think of Olgivanna Lloyd Wright, Frank Lloyd Wright’s third wife. A documentary on her life calls her “A Partner to Genius.” Less generously, others who knew her—including family members—have called her a tyrant and a charlatan.

Wrote one such critic of Olgivanna’s reign at Taliesin West following Frank Lloyd Wright’s death in 1959, “This hierarchical system was appalling: the widow at the top, then the board of directors (a formality); then her own close inner circle, making all the real decisions; then working architects—the real working horses; at the bottom, students who paid high sums to be admitted, only to be sent the next day to work in the kitchen to peel potatoes….Mrs. Wright’s word was law. She had to be adored and worshipped and flattered as often as possible.”

They met at a dance performance at a Chicago theater in 1924. Both were married to other people at the time, but that didn’t stop them from somewhat scandalously shacking up together at Taliesen in Spring Green, Wisconsin. After divorcing their spouses and marrying in 1928, they moved “from the cool wooded hills of Wisconsin to the barren desert heat of the southwest following a bout of personal issues that would nearly end Wright’s career,” according to a history of Frank Lloyd Wright.

“Legal issues with his wife, ex-wife, and her children brought Wright to the brink of bankruptcy. After hiding for some time with his new wife Olgivanna Lazovich and her two children, Wright was finally able to pay off his debts and return to a better life. Just at this time, the Bank of Wisconsin denied him any further access to his Taliesin home and studio because ‘the premises were being used for immoral purposes.’”

Even after Olgivanna died in Scottsdale in 1985, she continued to have a strange control over the legacy of Frank Lloyd Wright. Before her death, she planned the removal of Wright’s body from its Wisconsin grave, which was then cremated, mixed with her own ashes, and used in the walls of a memorial garden built on the grounds of their home at Taliesin West. The Wisconsin legislature prohibited the removal of his body, but nonetheless her plan was carried out successfully. What Olgivanna wanted, Olgivanna got. Even in death.