One dances, the other shucks

So Liz and I are walking through Santiago’s produce and fruit market, Vega, when she pulls me over to this stall fronted with giant garlic in purple netting and celery stalks as thick as Kobe Bryant’s thighs and mounds of onions and lima beans and Jerusalem artichokes. 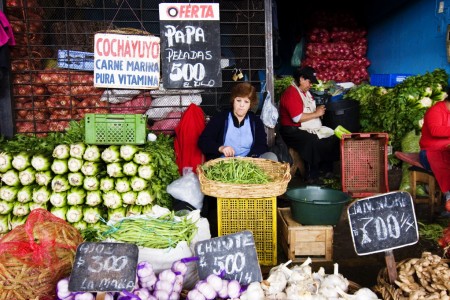 We stand in front of a woman seated before a basket of green beans. “Watch her,” Liz whispers without taking her eyes off the woman. The woman selects a bean, puts it in some gizmo sitting on her lap, and quickly juliennes the bean into a plastic bag. Then she grabs another bean and repeats the process. Over and over again. The gizmo the woman is using is a wondrously simple tool, something like a cross between a potato peeler and a hard boiled egg slicer. Still, can you imagine having to julienne green beans by hand all day long?

But the woman behind her, wearing the baseball cap, has an even worse job. She’s peeling celery. One stalk at a time. I’m not kidding you. I guess all I can say is that if you’re going to sit in front of a produce stall all day long selling habas verdes and apio, you might as well keep busy doing something.

While I was taking this photo of the two women, this little gypsy-like ensemble of musicians suddenly appeared out of nowhere playing guitars and the accordion. I have a sweet spot for the accordion. I love it, whether it’s in Mexican ranchera music or zydeco. Everything sounds better with an accordionist.

But that wasn’t all. Suddenly this red-haired woman wearing a bright red bolero jacket and white shoes starting dancing in the middle of the mercado. Even more amazing, she was balancing a wine bottle on her head and had a Chilean flag stuck in her ponytail. It was so bizarre that I kept looking around expecting some film crew to be shooting the whole thing. Surely she had to be an actress and this was some crazy scene in a Moulin Rouge-like Chilean musical. 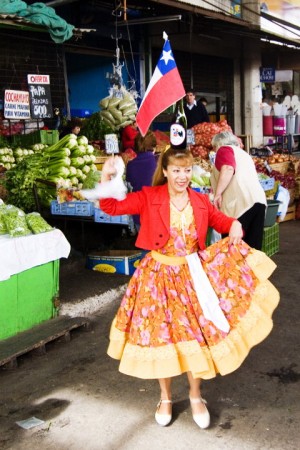 She was dancing the cueca, Chile’s national dance. And that was interesting too because the cueca is like a courtship dance. You have a guy who dances in a way to evoke a rooster looking to get some from a hen in heat. According to a book I read, “The woman approaches the man with elegance and flirtatiousness, then she slightly lifts her skirt with her left hand and gracefully moving her handkerchief with the right, she flees from the man.”

Which, as you can see from this photo, is exactly what this woman with the wine bottle on her head was doing except she did not have a partner in the dance.

Unless…you don’t suppose she saw me as the rooster, do you?