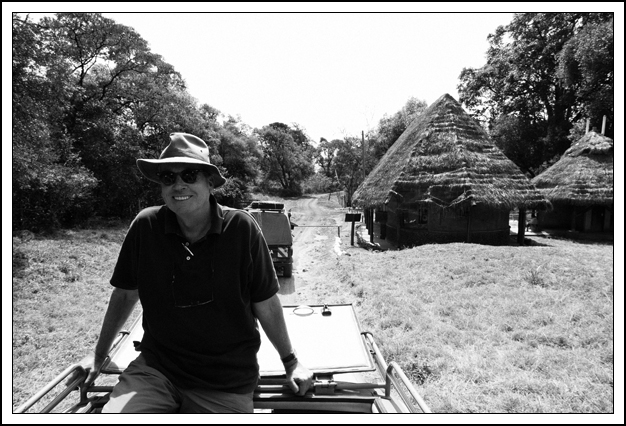 It rained again last night for the third night in a row, an indication that the “little rains,” as they are called, have begun. It is time to leave.

I saw Pete yesterday afternoon. He’d come to the Tribe Hotel where I am staying to pick up the gear he’d left when we began the trek to Lake Paradise. It was a little awkward seeing each other. I’d cut out early from his friend’s camp in Samburu and now he was canceling his reservation, which I’d made, at Tribe and staying on with the Douglas-Hamiltons in Nairobi. Neither one of us really knew what to say to the other.

“We good?” he asked me as he grabbed his gear.

I shrugged. “It was a mistake to go to Elephant Watch Camp,” I said. That could have started our argument all over again but he let it go. I was glad he did.

All I’d done since I’d gotten back to Nairobi was sleep. But I was still tired. I thought about going to the Maasai Market and buying gifts to bring home but couldn’t bring enough enthusiasm to the mission to make it happen. Besides, I didn’t really want to spend the afternoon haggling with Nairobi Maasai over badly carved wooden elephants and beaded bracelets. I didn’t want any of that stuff anyway. And I knew that just being at the market would depress me. It didn’t have anything to do with Kenya. Not really. I’d seen Kenya. I’d gotten her red dirt thick into my hair and under my nails so that even now when I showered it flowed like blood down the drain. Her smoky scent was in my nostrils, the sounds of her night noises filled my head. What did I need with tourist trinkets?

I slept in the afternoon and then I got up and took a long, hot shower and dressed and went down to the bar and ordered a whisky but there was a large screen TV next to the bar and a soccer game on and I didn’t want to sit there and listen to people cheer and the non-stop prattling of the announcers so I took my drink and went outside by the pool, which was empty, and sat in a wicker chair, slowly sipping my drink and taking deep breaths of the cool, smoky air.

After awhile I went into the restaurant and asked for a table and the hostess, who was tall and lean and very attractive, asked me if someone was joining me and when I said no, she frowned and said, “I’m sorry.” I wasn’t. It was my last night in Kenya, my last night in Africa, and the last thing I wanted to do was make small talk with someone, even if it was someone I liked. What I wanted to do was exactly what I was doing: To sit at a small table in a corner of the restaurant and order a second whisky and not look at the menu, not think, just let the thick, moist air wash and the white noise of the restaurant wash over me and not think of anything. Not think of anything at all.

I ordered dinner—I can’t even tell you what—and a bottle of South African Shiraz and took my time over dinner, not thinking about the food, whether it was good or not or if I was enjoying it, just eating it and sipping my wine and trying hard not to think of what it was like to sleep under the stars at Lake Paradise or hear the cough of the leopard in the cliffs above us or the sound, felt in your chest, of a herd of buffalos running out of the forest, or the copper taste of fear when you come up a rise on a trail and an elephant is standing just yards away from you or the taste of Julius’ camp pancakes when the cold is still in your bones or how really wonderful a whisky tastes at the end of the day when you’re hot and tired and sweaty and you’ve spent all day stalking wildlife in a cloud forest.

I tried very, very hard not to think of any of this. And then I paid my bill and, a little wobbly, went back to my room and slept soundly until the desk clerk called me at 4:15 to wake me and tell me that a car would be waiting for me at five to take me to the airport. I showered, packed, paid my bill, and a few hours later I was on the Virgin flight headed for London, Africa behind me, almost as if it had all just been a dream.