Pablo Neruda was, by any definition, an odd man. A flamboyant life-long diplomat (his last posting, under Salvador Allende, was as Chile’s ambassador to France) who was a rogue and, by his own description, a bit of a child. From his autobiography: “I have built my house like a toy house and I play in it from morning till night.” 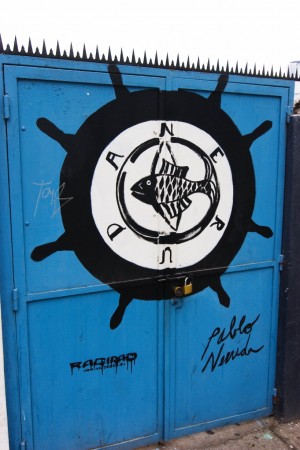 Walking around La Chascona, you can see what he meant. Although Neruda was both fascinated and fearful of the ocean, he decided to build the main part of the house like a ship. Many of the windows are portholes and the rooms are long and narrow, just as they’d be on a boat. I’m sure if he could have found a way to actually rock the narrow dining room, where he hosted dinner for friends and diplomats, he would have (although the creaking wood floors, taken from an old ship, give you a bit of the same effect).

Still, he did his best to add a bit of Disney imagination to everything (he and Walt would have gotten along famously, I’m sure). For instance, our guide Alejandro showed us the Dutch-looking ceramic salt and pepper shakers he had specially made to use at dinner parties when he was bored with the company. The salt shaker says “Marijuana” and its pepper cousin reads “Morphine.”

“He would casually put them on the table at the beginning of the meal just to outrage guests that he didn’t particularly like, hoping they’d go home early,” Alejandro told us.

This was back in the 50s, mind you, so I’m sure it had the proper effect (can you imagine an ambassador to France doing something similar these days?). And, in keeping with the “toy house” theme, he had a secret door built into the back of the china closet leading to his private quarters. That way, if he was really bored, he could quite simply vanish from the room.

Of course, Pinochet, like any right-wing dictator, was less than enamored with this poet/diplomat who won the Nobel Prize in 1971 while his buddy, the Marxist Salvadore Allende, was president.

So one of the first things Pinochet did following the military coup in early September 1973 was to send thugs up to loot La Chascona. They burned down his office and library and gathered Neruda’s books and letters, burning them in a public display. As if to say, we don’t give a rat’s ass that he is a great Chilean artist who has won the Nobel prize. He’s still a pinko commie, so fuck him.

Two weeks later, Neruda, ill from prostate cancer, died from what most say were complications of the disease. But his wife, Matilde Urrutia, always insisted he died of a broken heart. Pinochet allowed only his family and a few friends to attend his funeral. His body was taken from the poet’s house, where it had been lying in state, by Matilde and Pablo’s sister. The small procession—maybe a dozen at most—moved slowly down the street but as word began to spread that the coffin carried Pablo Neruda, more and more mourners fell into line.Until the procession stretched for dozens of blocks, overwhelming the military presence on hand as they shouted “Neruda y Allende, un solo combatiente” (Neruda and Allende, one fighter)! to the capital’s General Cemetery where Matilde said her final good-by.