See this painting? It’s been driving me crazy. It hangs on a wall of the dining room of the Matavai resort and every morning while I’m drinking my coffee and eating my plate of fresh papaya and pineapple, the woman in this painting accusingly stares at me. I feel like screaming at her, “What the hell do you want? Why won’t you leave me alone?” Even though I’m sure that she wouldn’t answer me even if she were standing before me in the flesh. She seems like the type that likes to suffer in silence. 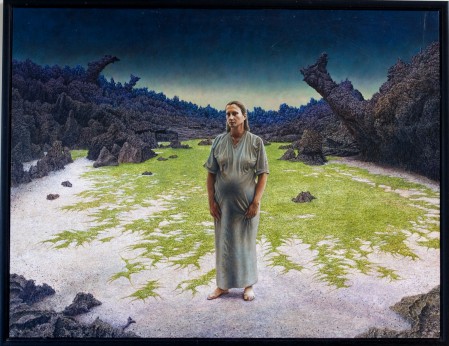 You can’t really tell just by looking at this little photo, but the painting is actually quite large—about 6 feet wide and 4 1/2 feet tall. And the detail work is amazing. Sometimes I get my nose just a few inches away from the canvas and admire how each little grain of sand was carefully painted, each square inch of rock meticulously detailed. It must have taken at least a year to paint this.

The artist is named Mark Cross and he lives here on the island. I asked Hemi, the manager at the Matavai, about him and he loaned me this book Mark published a few years ago which is partially about his art and partially about his philosophy on life which, if I had to sum it up in one line would be, “Art is a way to learn how to live.” Which is a Henry Miller quote.

This painting that has been unnerving me for days is called Refuge and, according to what Mark says in his book, he painted it after coming upon “this enchanting glade of sand and salt-weed situated amidst the most hostile environment I had ever seen. This landscape became the perfect stage for my idea that compares the glade with the mother’s womb where the outside world is often hostile and impenetrable and we are safe and ignorant in the oasis of the womb.”

Which might seem a little paranoid until you discover, as I did from the book, that Mark’s eldest daughter, Mishca, died from cancer a few years earlier. And after I learned that, the painting made more sense to me. And I stopped seeing the pregnant woman as angry. Now I just think she’s sad. Because she knows what’s going to happen once she gives birth to her baby.

I asked Hemi if Mark is on the island right now and he said, yes, he has a small art gallery in Alofi where I might find him. So later this morning I’m going to go into Alofi and look him up. And ask him some questions about this painting. Like, is the pregnant woman your wife? And maybe if I’m lucky he’ll tell me about Mishca. But then again, maybe he won’t. And that’s fine too.