Running down an old Impala 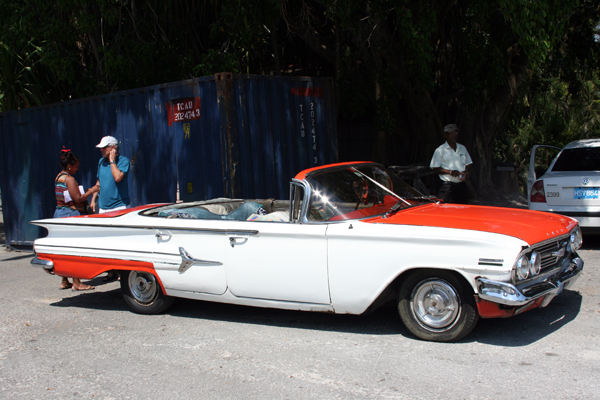 The old Impala we rented to take us to the Hemingway Museum. Not exactly the car of our dreams. Photos by David Lansing.

Usually getting a great classic car to drive us up to San Francisco de Paula, the little town on the outskirts of Havana where Ernest Hemingway lived for over 20 years, is as easy as walking down to the Capitolio building on Prado and trying to decide between, say, a ’57 Chevy convertible and a ’55 Cadi. But yesterday there were no cars around. I don’t know what the deal was. And a long stretch of the Prado, near the Cinema Payret, which is usually filled with great old cars, was cleared out with cops keeping people away. So something was going on but it was impossible to figure out what.

We walked through the shade of the Parque Central and past the Hotel Inglaterra, which is a beautiful old hotel with a Spanish-style sidewalk café in front, looking for an old taxi but there were none to be had. We were just milling about, at a bit of a loss, when a street hustler approached us. He said he could get us a taxi. We asked him what kind of a car it was and he pulled out an old business card that had a photo of an early ‘50s pale blue Cadillac convertible, exactly the sort of car we were looking for. The car was just a few minutes walk away, he assured us. So we followed the guy back through the Parque Central, up Prado, and to the steps of the Capitolio—exactly where we’d started half an hour ago. 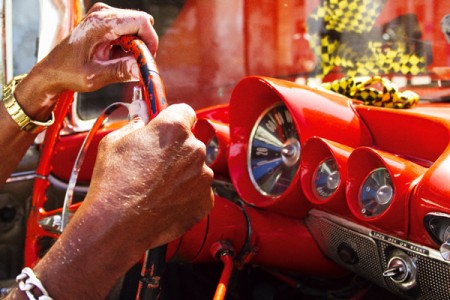 Of course, there was no pale blue Cadillac. But there was a two-tone red and white ’56 Impala convertible. It wasn’t much of a car. The inside was terribly beat-up and the seats were covered with what looked like horse blankets. Still, we’d been walking around for over half an hour and this seemed to be our best bet. We did some negotiating with the street hustler (you’ve got to pay him separately so as to reward him for finding you a car) and climbed in. It wasn’t until a couple of us had gotten in that we realized that while we’d been negotiating with the street hustler, the driver of the car had been negotiating with a couple of Canadian women. They thought the car was theirs and they weren’t real thrilled when we started to get in. One of the women said something to Fletch and Hardy but by then the rest of us were already in the car and it was a done deal. I felt kind of bad about stealing the girls’ taxi, but what can you do?

The deal was that the driver had to be back in Havana for another job by three. We wanted him to take us up to Hemingway’s old place, Finca La Vigía, and then down to the fishing village of Cojímar where we would have lunch at La Terraza. Cojímar is where Hem kept his fishing boat, Pilar, and La Terraza is the seaside café where he used to drink with the fisherman who told him the stories that inspired The Old Man and the Sea. It would be tight to see the Hemingway Museum and have lunch at La Terraza and still get back to Havana by three, but it seemed possible. As it turned out, it was not possible and the driver would abandon us in Cojímar where it would be a bit of a scramble trying to find taxis to get us back, but I’m getting ahead of myself. First I want to tell you about visiting the old Hemingway home in San Francisco de Paula.