The weather turned hot and sticky on Saturday. The Girls, anxious to get out of town, proposed a trip to San Sebastian del Oeste in the Sierra Madre mountains.

Although San Sebastian is only 40 miles from Puerto Vallarta, it used to be a four or five hour by horse and buggy. Okay, I’m exaggerating about the horse and buggy part, but it could take half the day, particularly during the rainy season.

Then a few years ago they paved the highway between PV and Guadalajara and suddenly you could get to San Sebastian in something like an hour and a half.

Of course, that required that you didn’t get lost. And I always manage to get a little lost, particularly when traveling with The Girls who may just be the worst map readers I’ve ever known.

We kept going into little villages and asking people on the street for directions. They’d point this way or that and we’d travel on for another 20 or 30 minutes before I’d announce, “I don’t think this is the right way.” And then we’d backtrack and take a different turn until, once again, we were totally lost. The only thing I was sure of was there was a big honking bridge somewhere between Las Palmas and Mascota, called El Progreso, and if we ever saw that, we’d be close. 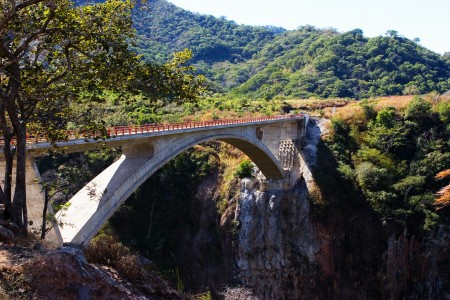 I’d pretty much resigned myself to the idea that we were going to be driving for the next six or seven hours and would suddenly be in Guadalajara—which would have been fine—when we came around a blind turn in the mountains and there it was—the rainbow bridge, El Progreso.

After that we only got lost once when I didn’t see the sign that had fallen over in La Estancia telling you where to turn to go east to San Sebastian. Fortunately, we came across a couple of bomberos (firemen) having a smoke along the side of the road (I know, the irony of it, right?). The Girls got out (I think the bomberos thought it was their lucky day), gave the boys a big smile, and next thing you know, we were headed up the right road. 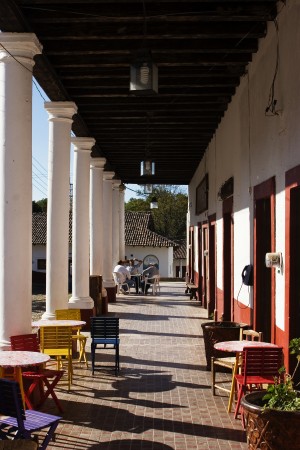 Twenty minutes later, we were in San Sebastian. Just as everyone was shutting down for comida. Oh well. We’d made it. And the restaurants around the plaza were still open. So we joined the rest of the locals and looked for someplace to have a meal.