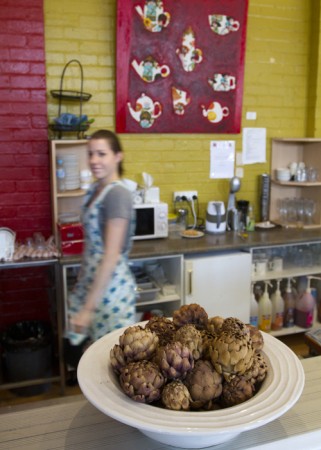 I was telling you the other day about the Huon Valley which used to be the center of thousands of surrounding acres of fruit trees and berry farms, all growing the stone fruit and raspberries and such that went in to IXL Jam (from an early story on the jam factory, which is now my hotel in Hobart: “The raspberries were brought up in kegs, and inside the yard is a pile of these vessels, which were nearly all afloat during the raspberry season. The currants, gooseberries, and stone fruit were all brought up in cases that went as far as the eye could see…”).

Anyway, Sally and I were driving around the Huon Valley and just passing by all the little roadside stands selling strawberries and blueberries and cherries was making us both hungry so she suggested we drive into Cygnet, long the center of the Huon Valey, for lunch. She took me to the Red Velvet Lounge, a funky, eclectic brick restaurant that is the heart of little Cygnet. It’s the sort of place that’s almost too popular for its own good (even though it was well past one, the place was jammed and two young women were going crazy trying to keep up with all the orders).

The lunch menu was fascinating. They had smoked eel croquettes and quail saltimbocca and cold English pork pie (which, our waitress told us, they were out of), but in spying on the other tables, it seemed the most popular item was their cheese board: several different types of local cheeses (Heritage Double Brie, Grandvewe Blue, King Island Surprise Bay Cheddar), plus grilled fruit bread from their bakery, crackers, and apple slices. So that’s what we ordered.

The other cool thing about the Red Velvet Lounge were the shelves lining the brick walls that were filled with the restaurant’s own preserves, all made from goodies grown in and around the Huon Valley: preserved apricots, peaches, cherries and well as some exotic jam combos like plum and vanilla or apricot and saffron. They also make (and sell) their own mustards, sandwich pickles, olives, and something called Gentle-woman’s relish. I’ve heard of gentleman’s relish in England which is either a) a spicy anchovy relish or b) slang for jizz (take your pick), but have never heard of Gentle-woman’s relish. Which is why I had to buy a jar.