Shooting a telenovela in Parque Juarez

Aldama seemed noisier than usual this morning. Small groups of teenagers, mostly girls, were giggling and shrieking as they passed quickly past my door towards Parque Juarez. Which is in the opposite direction of where they should have been headed, which is to school. I grabbed my coffee and stuck my head out the door to see what the commotion was about.

A film crew was set up on the corner, across from my neighbor, La Mansion del Bosque. They were shooting a scene from a telenovela, those Mexican soap operas that seem to be on every blue screen in every house in San Miguel and elsewhere in Mexico. Personally, I couldn’t tell you Gabriela Spanic from Alicia Machado if my life depended on it, but evidently the young girls twittering around the park like juvenile gackles, all with cell phones they were using to either take photos or send text messages to their friends as to what was going on, knew exactly who the young actor and actress were in this scene.

Not that it was much of a scene. A young actor with long, wavy black hair stood by the entrance of the park holding a bouquet of red roses, waiting for a slender young woman to arrive. He then kissed her on the cheek and handed her the roses before suggesting that they go for a ride in a horse-drawn carriage that just happened to be coming down the cobblestone street. The driver of the carriage, wearing a floppy straw hat, would stop, the young couple would get into the carriage, and it would proceed for 10 or 15 feet before the director would yell “Alto!” and they’d do it again. 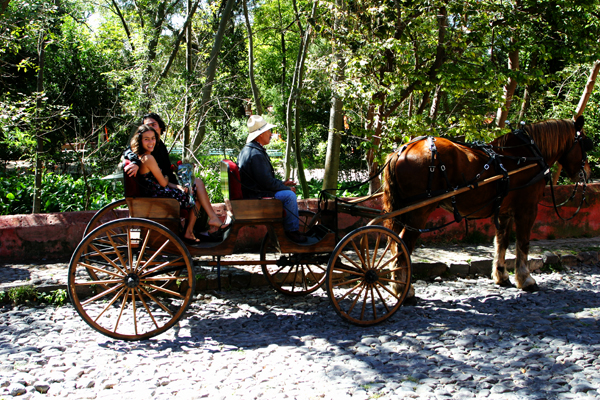 That was it. But they did the scene over and over, mostly because neither the driver of the carriage nor his horse was particularly happy coming down the slight slope of the cobblestone street. And I don’t blame them. This is a rough section of road. Pitted and uneven. The carriage did not like it, the driver did not like it, but most of all, the horse did not like it. Which is probably why, in real life, there are no horse-drawn carriages in the Parque Juarez. But why should that matter?