I hate traveling with photographers. They’re always screaming about “The light! The light!” Like Tattoo announcing the arrival of “De plane! De plane!” on Fantasy Island. Hell, I said the same thing to Macduff over drinks in the Honolulu airport as we waited for our connecting flight to Lanai.

“I despise photographers,” is what I said. He took a gulp of his single malt and replied, “They’re all right in a way. In fact, I’m rather good friends with a few of them. But I get your drift. They can be a pain in the ass sometimes, there’s no denying it.”

Said this as if he weren’t talking about himself, which he was, of course, because he is a professional photographer. And a very good one. One of the best. But he’s also an incredible pain in the ass.

I’ll show you what I mean. Yesterday morning we were driving down to Manele Bay which heads south from Lanai City and immediately drops down into Palawai Basin. Gorgeous drive. Palawai means “pond scum” and is so named because of the fog that often pools here early in the morning. This is the heart of the old pineapple lands. The earth is bright red and the high grass, growing where the pineapple fields used to be, is lime green. And there’s a long stretch of two-lane road, just past the turnoff to the airport, that is straight as a rail and lined with Cook pines (which look just like Norfolk pines, and that’s what most people think they are, but actually the only Norfolk pine on the island is up at the Lodge at Koele and that’s a different story). 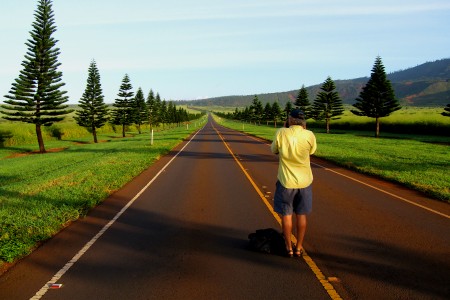 Anyway, we’re zooming down Manele Road and suddenly Macduff grabs my arm and says, “Pull over! Now!” He wants to take a picture. Fine. I mean, how long can it take to snap a photo of an empty road. So I pull over and he gets his camera bag and starts looking around like he’s Baz Freakin’ Luhrmann and he’s setting up a shot in the Outback for Nicole Kidman and he wants to make sure the light is just right and everything. So he gets his light meter out and he stands right in the middle of the road and shoots about four thousand photos and then he goes and stands in the low-cut grass on the right and shoots another two- or three-thousand photos and then he changes lenses and shoots some more and then he wants me to get a different camera bag out of the Jeep so he can shoot another eight thousand shots with a different camera.

And while he’s doing all this, I get out my little Canon and take exactly one photo of him. Just so you’ll know what I’m talking about. About an hour later, he’s finally finished shooting his masterful shot of the empty road. And this is what it looks like.

Now you tell me: Was it worth it?