Sitting around the pool waiting for snow

The photo I took this afternoon of the Suncadia Resort pool from my balcony is so deceptive. It looks like a nice summer day, right? There are a couple of little girls playing in the pool while their parents lounge in shorts or swimsuits. 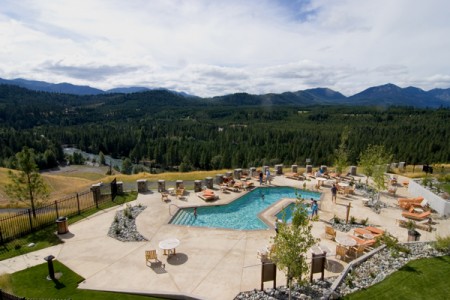 What you’d never know by looking at this picture is that the wind was blowing about 30 mph and it was freezing outside. So cold that I had a fleece jacket on while I took this shot and I was still shivering.

So what the heck are these people doing in the pool? God only knows. But I’m on the eastern slope of the Cascade Mountains in Washington, a state where people could care less about the weather (if they did, they’d move). If it’s suppose to be summer (Labor Day is behind us but technically summer doesn’t end until September 22) and there’s some water nearby, they get in it. Even if it might start to snow in an hour.

I know this because I used to live on the eastern slope of the Cascades in Oregon and spent much of my time as a teenager hanging out around the pool at Suncadia’s sister resort in Bend, Sunriver, where we used to have snowball fights. While in the pool. Seriously.

We knew summer had arrived when thin layers of ice stopped forming atop shady pools on the Deschutes River. In August we’d go skiing at Mt. Bachelor. In shorts and T-shirts. Because we could.

There’s something about living in a cold and rainy climate that makes people a little nuts. It’s like, “Okay, the thermometer says it’s 37 degrees out but it’s August, so let’s go to the lake!”

The truth is I hate cold climates. And as far as I’m concerned god had absolutely no business inventing wind. A little breeze, fine. But wind is obnoxious. It’s like an alcoholic uncle, just waiting to spoil the family picnic.

Okay, one last thing and then I’m going down to the bar to order a nice summer drink like a hot buttered rum. This afternoon I met a chef from Suncadia, Oscar Guitron, and he’s going to be cooking for a little dinner party I’m going to tonight. So Oscar and I got to chatting and he invited me to stop by before dinner so he could show me the lobsters he’s going to prepare tonight. He wrote down his address on Honolulu Drive.

That just about says it all, don’t you think?