Snorkeling with Heidi and Harry 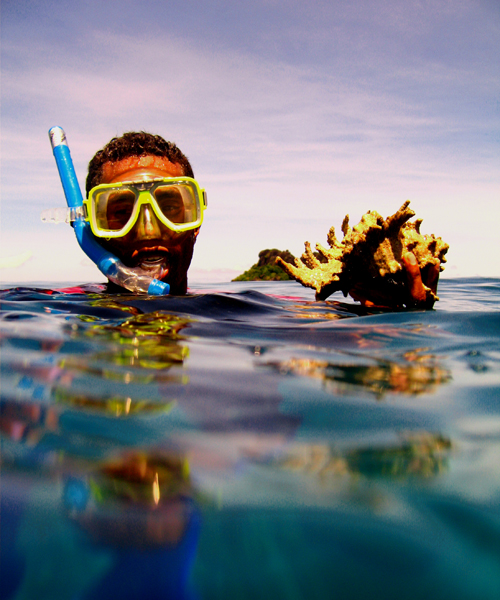 This morning, Abel, Likuliku’s dive master, took me and a newly-wed couple out snorkeling along Castaway Reef. Let’s call the newlyweds Heidi and Harry, just because you never hear those names anymore.

Heidi and Harry, who look just like all the other newlyweds at this resort (they’re young, cute, and ridiculously fit—what else do you need to know?) were not exactly thrilled to see me climb into the dive boat. I went and sat in the stern, next to Abel and a rusty red can of smelly petrol, while they took up positions in the bow. Once settled, they shifted their bodies in unison so Abel and I could get a good look at the backs of their heads. As Abel pushed off from the dock, the young couple started whispering to each other, as if all the fish in the lagoon were sleeping and they didn’t want to wake them.

“I hope I didn’t eat too many bananas for breakfast,” I blurted out, apropos of nothing. “They make me gassy.” I have a habit of saying stupid things when I’m uncomfortable. It’s a lifelong curse. Heidi glanced over her shoulder at me as if I’d just explained that Tourette’s syndrome ran in my family, which maybe it does. Harry got up and shifted seats so that he was now between me and Heidi and 15 feet of boat. Then he leaned over and whispered something in her ear while shrugging a shoulder in my direction. I imagined that he probably said something like, “He’s not a newlywed. Shun him.” Or something to that effect.

Abel, ever the Fijian gentleman, grinned largely at me, his teeth like Chiclets, and said, “Mr. David, you see any nice looking women in Yaro yesterday?”

Yaro is a Fijian fishing village on the north end of the island. Yesterday, Abel took me and two other newly-minted couples to the village, about a 15 minute boat ride away, where Abel took me around to meet all the available young ladies, at least two of whom were actually over 16, while the newlyweds drank kava with the elders and received gifts.

Anyway, Heidi and Harry and I hopped into the water and swam away from Abel’s boat, and as we’re making our way towards the reef, two things struck me as a bit unusual: Heidi and Harry were holding hands while snorkeling, something I’d never seen before, and Heidi was wearing a red bikini that had white lettering on her butt that said JUST MARRIED! Actually, the “I” was sort of stuck in the crease of Heidi’s butt and at first I thought it said JUST MARRED!, which made more sense to me, but when I got closer, I spotted the “I” hiding in her bottom like an eel in the shadowy recesses of a cave.

I found this so fascinating that I was having a hard time paying any attention to all the spangly, darting reef fish all around us. Was this a thoughtful bridal shower present from a best friend, I wondered, or did Heidi discover this little designer wonder on her own? Is there a ladies clothing store where Heidi lives that, in addition to selling panties that have hearts stenciled on the crotch, also carries swimsuits announcing your relationship status? FUN SINGLE! CONFUSED ENGAGED! SWINGER!

Or perhaps she’d found it online—you can buy anything online these days—at a nuptial store for clothing. What else might they sell? Matching bowling shirts proclaiming HONEYMOONERS; baseball caps separately labeled BRIDE, GROOM; flannel pajamas suggesting SEX TONIGHT? on the man’s top and NOT LIKELY on the woman’s?

There were a couple of reef sharks cruising beside me at this point but I didn’t have time for them, involved as I was in speculating on whether Heidi had a whole trousseau of JUST MARRIED! clothing in addition to the scarlet red bikini (which, at the moment, seemed to be attracting the attention of not only me but the little posse of ruffian sharks that had skittered past). Would I see her at breakfast wearing her JUST MARRIED! scarf to cover up her unwashed bedhead? Would she be donning her JUST MARRIED! cashmere shawl at dinner tonight? Did she, I wondered, have JUST MARRIED! bra and panty sets in appropriate South Seas colors: coral pink, cerulean blue, parrot green?