Soaking in my egg, staring at the fish 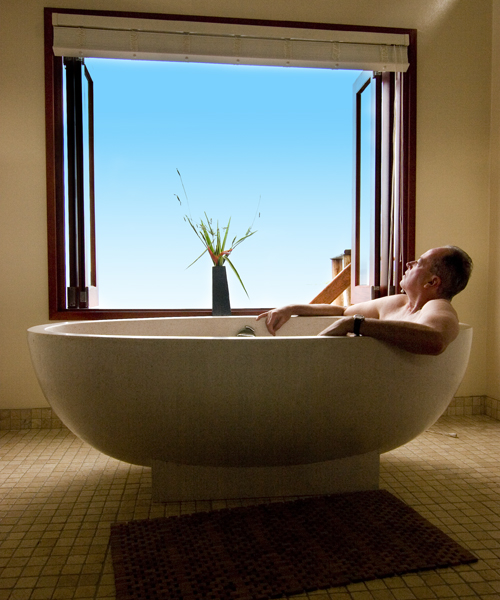 I should probably talk about my room at Likuliku. Actually, they don’t call them rooms here they call them bures, which Wikipedia defines as “the Fijian word for a wood-and-straw hut, sometimes similar to a cabin.” Well, I wouldn’t call my bure a wood-and-straw hut and it’s definitely not a cabin. Unless Fijian cabins usually come with limestone egg tubs set in front of wooden windows that open up over a coral reef lagoon. I had to take a picture of myself soaking in my egg tub yesterday afternoon just because it seemed so romantically ludicrous. I mean, Ivery or Lucy brings out a little canapé platter in the afternoon—little crackers with baby shrimp or cheese on them, that sort of thing—to tide you over before dinner, and I still had the bottle of champagne that was brought to my room the first night I checked in, so I opened the bubbly and ran a bath and sat there in the tub looking out at the lagoon where a couple of newlyweds were paddling in slow circles on their kayaks.

Fortunately my modest little wood-and-straw hut also has a hi-tech music system so I was able to plug in my iPod and listen to Glenn Gould playing Mussorgsky’s “Pictures at an Exhibition” while sitting in my warm egg drinking champagne. It was as pathetic as it sounds. And that’s when I decided to climb out of my egg, dripping water on the lovely limestone tile floor, and set up my camera on the edge of the vanity so I could take my picture with the self-timer. I couldn’t figure out what sort of a pose I should have. In the first one, I just looked directly at the camera. But that looked dumb. Then I took one with me holding my glass of champagne and sort of grinning like an idiot—Look! I’m in an egg tub over a Fijian lagoon drinking champagne!—but that was even worse. I ended up slumped in the tub looking out the window like I’m thinking about some really heavy things but really my mind was as blank as the sky.

The other really cool thing about my over-the-water bure (by the way, if you’re reading this on the web site and you look at the banner photo at the top, my bure is the third one over from the right; if you have a jeweler’s loop and put it up against your monitor, you can probably see me taking a bath in my egg tub—just kidding)…the other neat thing is that at the foot of my bed there are two strips of thick glass, each about a foot wide and three feet long, embedded in the floor so you can hang over the foot of the bed at night and look at the fish swimming by. It’s like a piscine freeway down there with schools of bright blue fish jerking left and then right as luminous needle fish dart past. Sometimes there’s a school of squid and once I watched as a reef shark gulped up a damselfish like it was one of the chef’s tasty canapés. 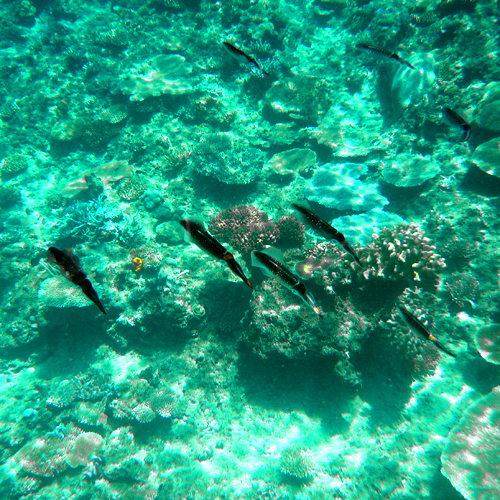 A squid school, swimming beneath my bure.

This morning I overheard one of the newly-weds, a Nicole Kidman-like beauty from Sydney, tell our server, Ivery, that she’d stayed up half the night laying on the bed, watching the fish. “Tim kept telling me to come to bed but I just couldn’t. I’d start to but then some amazing fish I’d never seen before would glide by in the light,” she said. “It was like being at an aquarium, except the aquarium was the entire lagoon! And you could look at it in bed!”

Her husband, Tim, who was wearing a bush hat, said, “Bor-ing!”

I wish I hadn’t overheard them. Now I’ll wonder, when I’m lying on my stomach in the darkness peering down into the illuminated sea, if she’s doing the same thing while Tim sleeps. And I’ll wish that I was there so I could say, “Oh my god, did you see those angelfish? Aren’t they just the most beautiful things? Aren’t they?”