Serendipity dances up and down the streets of San Miguel. For instance, one day I walked up Aldama away from the center of town, past Parque Juárez, and towards the neighborhood of San Antonio. Having recently reread Mary Morris’ book Nothing to Declare: Memoirs of a Woman Traveling Alone, in which she took up residence in this barrio for a year, I was curious to see it for myself.

In her book, which was published over 20 years ago, she says, “I never would have moved to the neighborhood called San Antonio if I’d known better. For that part of town was different from the other parts. Very few Americans lived there. It was too far from the center of things. I would have to walk half an hour up a dusty hill to get to market. It was the poorest part; it was where the servants who served the wealthy lived and where others struggled just to get by. It was the dustiest, dirtiest place, where the Mexicans would call me “gringita” and my own mother, when she heard me describe it, would beg me to leave. I had no idea what I was doing when I moved into San Antonio. But I am grateful for the mistake I made.”

I don’t know if Morris has been to San Antonio lately, but things have changed. It’s been gentrified. In fact, the reason I was headed there was to look for a little organic produce store someone had told me about where you can buy the most delicate of local grown lettuce as well as heirloom tomatoes.

After a little searching around, I found the organic place and bought some squash blossoms and fennel. Leaving the store, I noticed that just across the street was a bakery where I bought a loaf of just-baked sourdough bread. Like something you’d get in San Francisco. And it was while breaking off a chunk of this still-warm bread that I stumbled across a cheese shop with a very nice selection of French cheeses.

As I said, Mary Morris’ old neighborhood has gone a bit upscale since she was there. I think today her mom would be just fine with her living in colonia San Antonio.

Anyway, it was while walking home with my squash blossoms and brie that I came across Eunice O’Hanna. Eunice lives in one of those grand mystery homes in San Miguel. From the street all you see is a brightly-painted wall with baroque façade and intricately carved wooden door. What’s behind the wall and door is always an intriguing mystery.

As I was walking down the street, Eunice, who must be in her 80s, was just coming out her front door. We chatted for a few minutes and then she invited me in. I followed her through the door and into a magical courtyard with fountains and a riotous garden of tropical flowers, particularly pink- and apricot-colored bougainvillea. It was like a miniature Garden of Eden which, Eunice explained, is why her décor had this Paradise-lost theme to it, centered by a very large, very beautiful Adam and Eve wall mural. 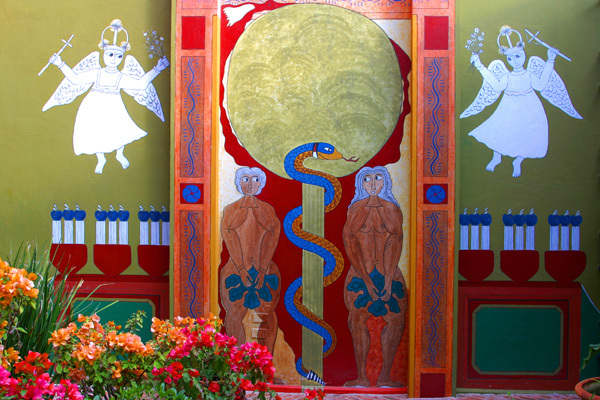 The Adam & Eve mural in the home of Eunice O'Hanna. Photo by David Lansing.

It was all fascinating. But not as fascinating as the dozens and dozens of strange necklaces Eunice had designed and now had on display in two rooms on either side of the courtyard entrance. The necklaces were made from old beads and amulets and coins as well as what Eunice called “found objects.” Meaning just little things she’d come across somewhere in Latin America that caught her attention.

Since many of the necklaces looked as if they’d been sitting in their display cases for decades, I asked her if she sold many. No, she admitted, not many. But, she said, she didn’t care.

“There are plenty of people who want to buy them. I just don’t like to sell them. So usually I don’t.”

We were both silent for a moment while I tried to wrap my arms around this. Afterall, she had a gallery, albeit in her home, and the jewelry was well-displayed and there were prices on everything. Yet she wouldn’t sell them.

Why was that? I asked.

She sighed, holding one of the delicate pieces in her hand. “People don’t deserve them,” she said.

And then she changed the subject by asking if I’d like something to drink. Her maid brought out a tray with a pitcher of agua de jamaica and a little dish of lime slices. We sat out in the courtyard, drinking the refreshing hibiscus tea while staring at the wall of a naked Adam and Eve, forever divided by a conniving blue snake.