Mommas, don’t let your babies grow up to be cowgirls

When you go out for a ride at Alisal, there’s not a lot of yacking. Once you’re out on the trail, people seem to settle in and keep their mouths shut. Sort of like going in to a church. Talk just isn’t necessary.

So today I’m going to let the pictures do the talking. I’ve focused primarily on the cowgirls at Alisal—both the professional ones and the young ones just starting out. Just look at the photos—I think that’s all you need to know. 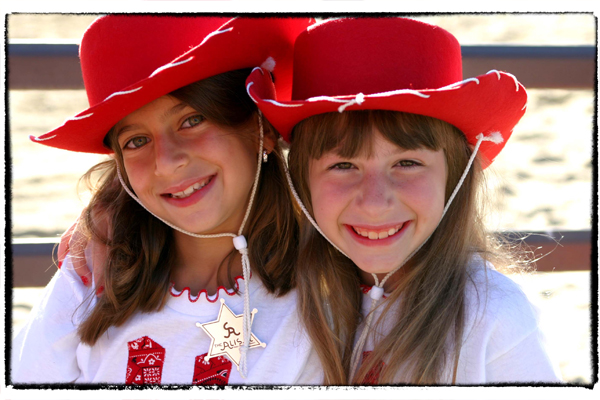 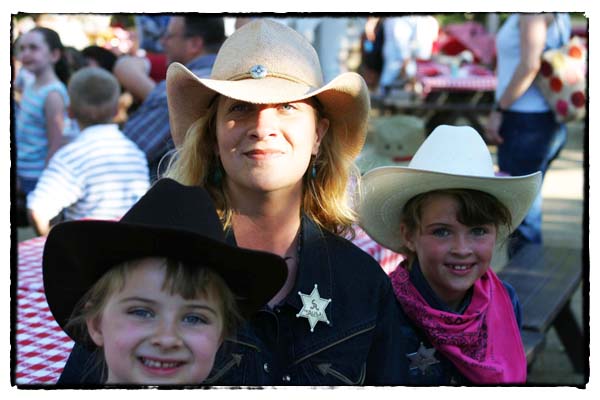 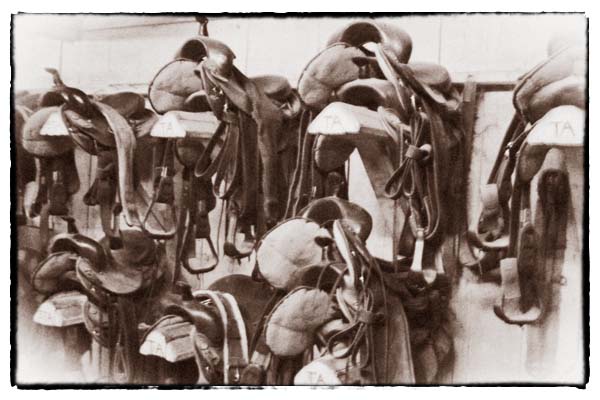 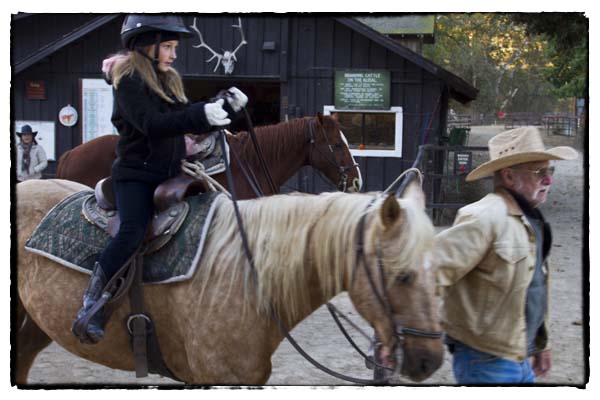 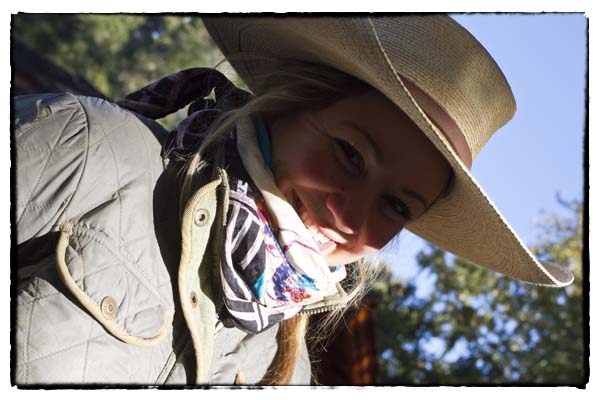 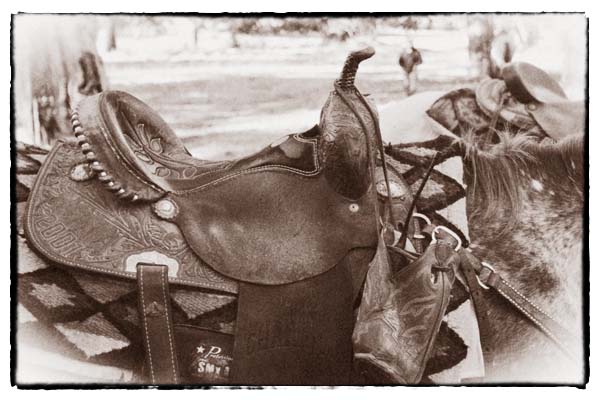 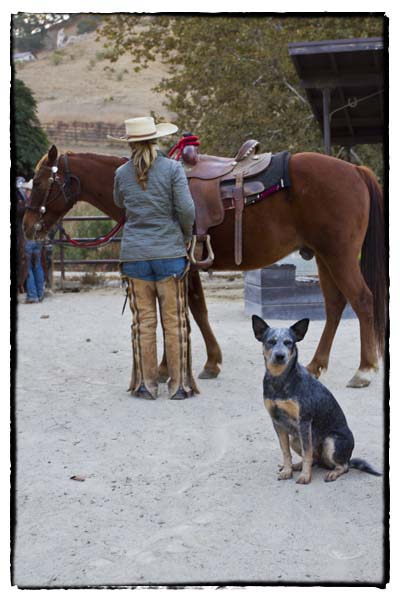 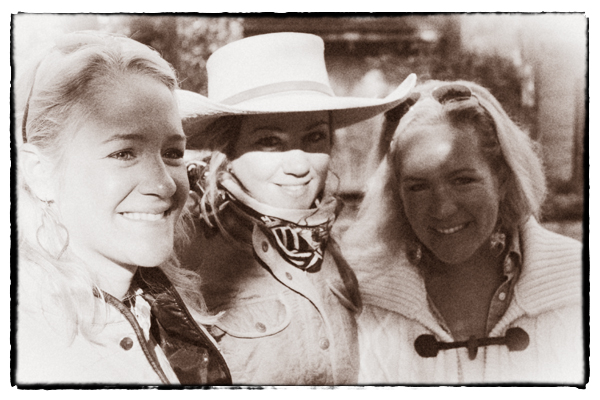 The Firestone sisters, Mary and Lucy (or maybe it’s Lucy and Mary), with my favorite lady wrangler, Haddie Tal. Photo by David Lansing.

At the Waggin’ Tongue Lounge at Alisal I met Lucy and Mary Firestone. They noticed me rudely staring at them and so turned around on their bar stools and introduced themselves. Very civilized.

The reason I was staring at them, in addition to the fact that they were obviously very attractive, is that I was trying to figure out if they were twins or not. They looked remarkably similar and yet, there was something about them that suggested otherwise. Finally I just asked them.

They gave me their business card (they blog as the Firestone Sisters) and that night after dinner, I went back to my room and, I’m rather embarrassed to admit, checked them out. I don’t want to put words in their mouths so here’s what their blog says:

“We are not Twins! We are commonly confused for each other (we will confess that we do look a lot alike).”

That was reassuring. At least I’m not the only one who thinks so.

On growing up together: “Our fondest memories include: sister bonding road trips up and down the Eastern seaboard (most without the permission of our parents), realizing that foam parties were overrated in Mojaca, Spain, and climbing the Great Wall of China together in 100% humidity.”

Confession: I don’t know what a foam party is and I’ve never heard of Mojaca.

About their childhood bedrooms: “Mary’s room was perfection in pink. Adorned with collages made from high fashion magazines, designer and vintage clothes strewen about, Mary’s room was a shrine to Hollywood Glamour Queens. Stacked beside her bed were cherished biographies of Marilyn Monroe, Katherine Hepburn, and other divas of the silver screen.

“Lucy’s childhood room was blue and lined with shelves crowded with sporting trophies. Lucy was the adventurous tomboy and natural athlete, playing boys hockey and baseball and becoming a high school all-American.”

Extraordinary. I don’t think I’ve ever read a blog where people included scenes from their childhood bedrooms as part of their bio. But there they are. The Firestone sisters.

An urban cowboy at Alisal 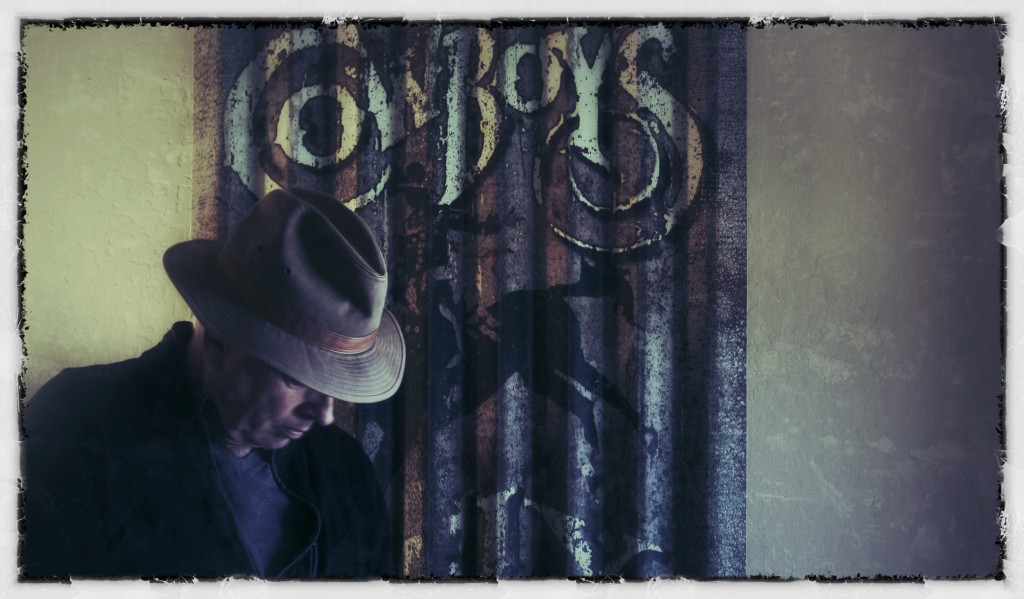 In my bungalow at the Alisal Ranch. Photo by David Lansing.

I’ve become quite fond of my bungalow at the Alisal Ranch. I like its quirkiness. For instance, there’s no TV but there is wi-fi. No phone but a very nice coffee maker. I’ve got a wood-burning fireplace and every morning an elderly gentleman comes by and asks me if I need a few more pieces of oak. The walls are decorated with poster-sized black and white photos of the cattle operation on the ranch in what looks like the 1950s, and next to the fireplace is a rusty corrugated tin painting of a cowboy on a bucking horse.

This morning, after a breakfast of coffee and huevos rancheros, I took the complimentary Wall Street Journal and went and sat in a plush outdoor chair set up under the shade of a hundred-year-old oak out on the lawn. Guests in their cowboy boots and Western hats filed by, giving me a “Howdy,” on their way to the barn while I sat sipping my coffee and reading about the financial struggles in Greece–every bit the epitome of an urban cowboy. A photo of the cowboy poet and wrangler Jake Copass taken at the Alisal Ranch in 2003. Photo by David Lansing.

If you really want to hear about it, the first thing you’ll probably want to know is why I’m going to Cowboy College in Arizona. That would be because of Jake Copass, an old bow-legged cowboy poet who passed away on June 8, 2006 at the age of 86. I met Jake, who worked as a wrangler at the Alisal Guest Ranch in Solvang, California, when I signed up for a morning breakfast ride at Alisal in 2003.

Jake put me on a horse, named Gumby, who refused to move. “Just give that ol’ boy a little whack,” said Jake. So I did. But Gumby would have none of it. Which didn’t really surprise me. I don’t really get along with horses.

There was Duke, the purebred Arabian my high school girlfriend tried to teach me to ride, though that was a real challenge since Duke would never let me mount him. Then there was the ol’ paint in Telluride named Buck (I should have known better) who threw me over a fence, breaking three ribs—mine, not his—before I even got my feet in the stirrups. And the shaggy beach pony down in Mexico that ran me half way to the border before stopping abruptly at the ocean’s edge and launching me like a javelin into the surf.

No sir, horses and me just don’t seem to see eye-to-eye on things.

When, after 15 or 20 minutes of trying, I still couldn’t make Gumby move even an inch, I dismounted with a curse and climbed into Jake’s beat-up pickup and rode with him out to the breakfast at Alisal’s old adobe.

“Not much of a cowboy, are you,” said Jake with a grin as we bounced along the dirt road.

“Let’s just say I am not and have never wanted to be a cowboy,” I said. I told him about Duke and Buck and my encounters with other horses.

Jake got a real kick out of that. For the rest of the drive he told me a bit about his own life; how, back in Texas, he was born on a little farm in Texas “way out in nowhere, way out in the sticks,” and how all he ever wanted to be was a cowboy.

“I loved horses and I kind of made up my mind at a very young age that I was going to be a cowboy, and my mom and dad supported me. And now here I am and I’ve been a cowboy all my life.”

Later that morning, after breakfast when we were riding in the truck back to the ranch, Jake looked at me with his great smile and said if I’d come back to Alisal sometime, he’d teach me to ride a horse. “I can’t promise to turn you into a cowboy,” he said, “but I think I can make you feel comfortable on a pony.”

I thanked him and told him I’d take him up on that offer. But the thing is, I never did. And a few years later, Jake was gone.

So here’s the deal: Alisal has invited me back out to the ranch later this month. And, in Jake’s honor, I’d like to be able to saddle a horse and go out on that morning breakfast ride like I was supposed to do with Jake. And so that’s why I’m going to Cowboy College in Scottsdale. To learn how to ride a horse, yes, but mostly just to make Jake proud.