Fra Antonio and Fra Marcella are standing with me in front of the Basilica di San Francesco in Assisi arguing about cappuccino. “Fra” is Italian for brother. The due friars are capuchin monks which is how this whole heated argument came up. I was hanging around in front of the church waiting for this ridiculous guide I’d accidentally hired when Fra Antonio came over and introduced himself to me. There were monks all over the place and I made the mistake of asking him why they wore different outfits and he explained to me that there are three monastic orders in Assisi and some monks wear brown robes and others black, shoes or sandals, beards or no beards, pointy hoods or piccolo hoods. 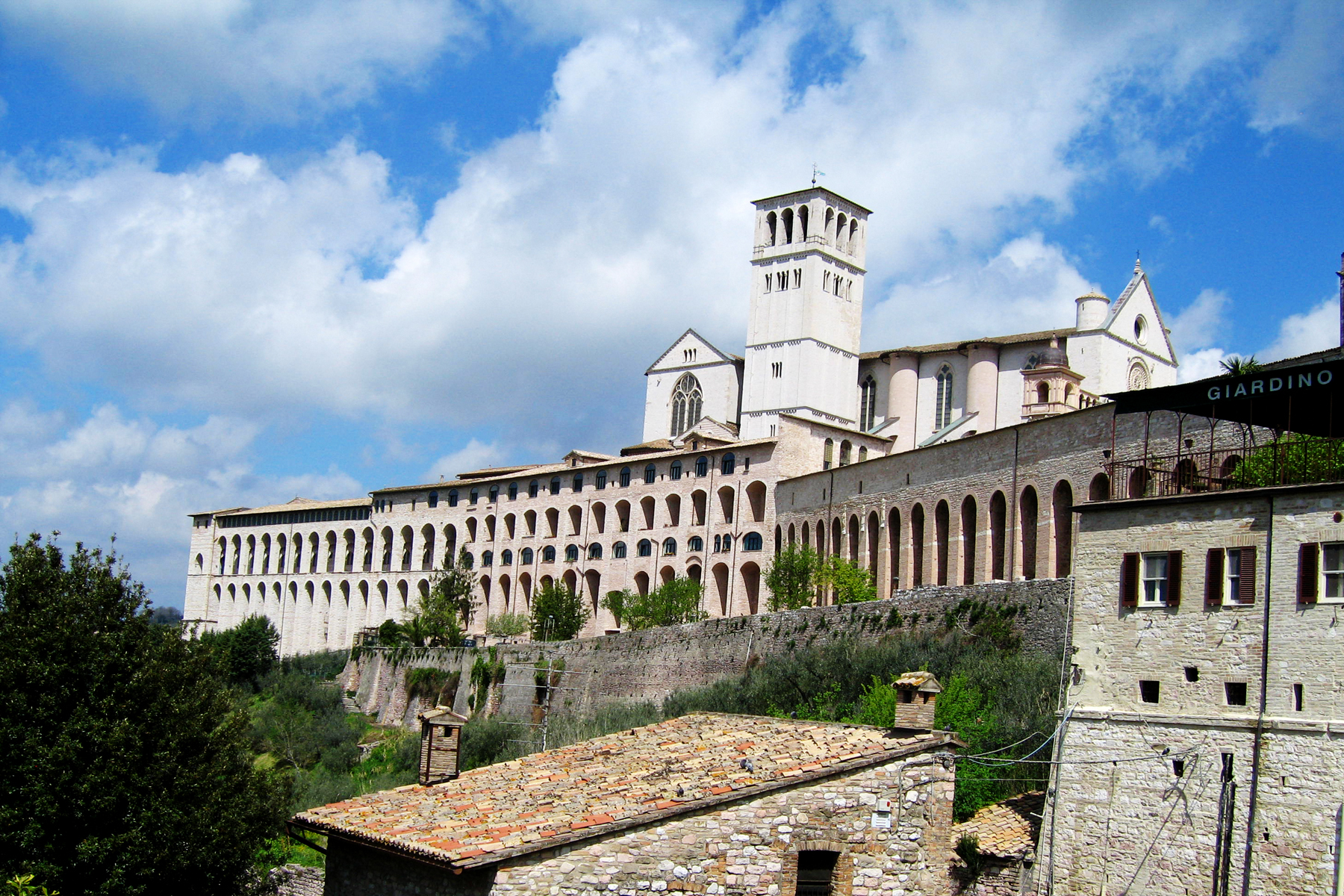 Photo of Assisi by David Lansing.

He wasn’t proselytizing and he wasn’t looking for a handout. I think, like me, he was just bored. I don’t know what friars do nowadays that there isn’t a lot of Black Plague to attend to and they don’t get to preside over the traditional let’s-roast-a-heretic bonfires in the middle of town. They must get tired of just praying all the time. You can only say so many Hail Marys before that just gets old. So I think Brother Antonio was just, you know, shooting the shit with me.

Just to make conversation, I asked him what came first, the capuchini or the cappuccino?

He took the question seriously, looking up towards the heavens for divine inspiration. Cappuccinos, he said slowly, playing with the three knots on his rope belt (the knots stand for chastity, poverty, and obedience, none of which I’m too interested in), were named after the reef of hair, called a tonsure, on the heads of the old-time monks. People thought the brown foam on top of the coffee drink looked like a tonsure.

Which is when Fra Marcella, who was obviously listening in on our conversation, came over. He put a hand on Fra Antonio’s dusty robe and laughed. “No, no, no,” he said, wagging a finger at his brother monk. The cappuccino was so-named because the capuchini robes are the same color as the milky brown coffee.

Well, that really pissed Fra Antonio off. He got so angry the top of his bald head turned red. He started kneading one of the knots in his rope belt like it was a mozzarella ball, though I couldn’t tell if he was taking his frustration out on chastity, poverty, or obedience. I’m guessing obedience. Brother Antonio explained to Brother Marcella that he didn’t know what the hell he was talking about. After all, the monks didn’t have just one color of robe. Go look at the painting by Giotto in the church, he told him. The robes are different shades of ash, black, earth.

“What do you know of cappuccino?” trumped Marcella. “You are not even Italian! You’re Spanish!”

Which is when my guide, Maura, finally showed up (almost 20 minutes late). The due Fras ignored her as they jabbed fingers into each other’s cappuccino-colored robes. She gave me a look of disgust and said, “You always seem to cause trouble. What have you done here?”

“Nothing,” I told her. “They’re just having a heated discussion over coffee. Shall we go look at the frescoes?”