A glass of wine and then a dash to the airport 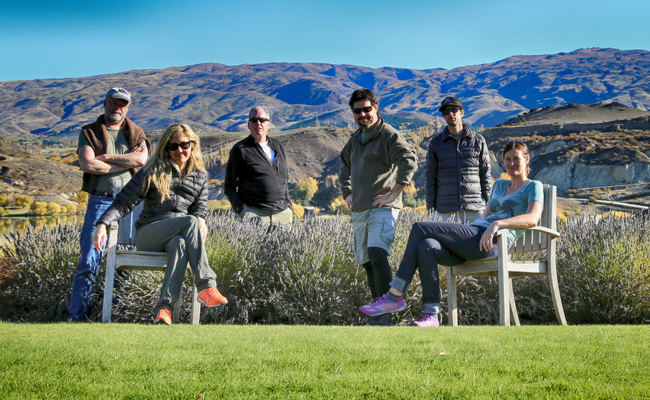 The group at Carrick Winery. We don’t look like we’re in a hurry, do we? Photo by David Lansing.

We’ve got a 4:30 flight from Queenstown and it’s already 3 but Justin and Casey want to make a quick stop at a winery nearby that they’ve heard about, Carrick. “Just five or ten minutes,” Justin says.

I don’t know. I’ve been to a hundred wineries and never got out of one yet in less than half an hour. Especially if you’re going to do a tasting, which we are. But what the hell. Adriena doesn’t seem worried and she’s in charge here.

And it is a joy to visit New Zealand wineries. Unlike their counterparts in California, which I’m most familiar with, you’ll seldom come across more than one or two other visitors anyplace you go. Carrick is no exception. In fact, except for the guy behind the bar, who we seem to have interrupted reading a book, we’re the only ones here.

We sample the pinot gris, the sauvignon blanc, and the chardonnay. I’m enjoying them very much but I’m also aware that it’s now 3:30 and, according to Adriena, it will take us at least half an hour to get to the airport, leaving us about 30 minutes to catch our flight. If we leave right this minute.

Which, of course, we don’t. Because we still have two wonderful pinot noirs to sample. Fifteen minutes later, we hustle to the car. But there is a lot of highway construction along the route. Someone states the obvious: “We’re never going to make it.”

Adriena makes a call. She tells someone at the airport to go over to the counter and tell them we’re running a little late but will be there shortly. We try not to laugh. I mean, it’s 4:20 now and we’re still not at the airport. And we have bags to check. For a 4:30 flight. Is she crazy?

But when we dash in to the terminal, the baggage handlers are ready for us. In two minutes everything is tagged and thrown on carts. Our tickets, already printed, are handed to us and we’re escorted through security. As I hurriedly rush up the stairs and on to the plane, a pretty flight attendant says, “We’ve been waiting for you.” Seems they actually did hold the flight.

Only in New Zealand.