A visit with James Joyce 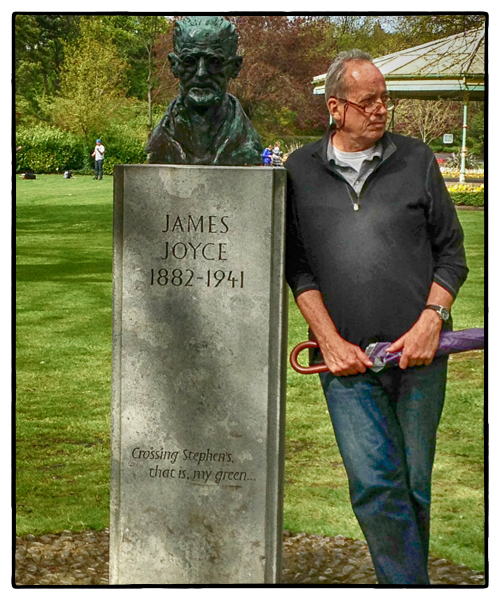 Hanging out with James Joyce in Dublin.

What I’d like to do, if you want to know the truth, is sleep away the afternoon on my purple bed in The Fitzwilliam Hotel but I know that would only make my jet-lag worse. Better to go for a walk, get a little fresh Dublin air. And I know just where to go. First to visit James Joyce in St. Stephen’s Green and then on to Davy Byrne’s pub for a beer.

Tony, the concierge at the Fitzwilliam, intercepts me before I can make it out the door. “You’d best be takin’ this wid ya,” he says, handing me an umbrella. I protest that the sky is blue.

“Sure it is,” he says. “But this is Dublin. The weather will change in an hour.” So I take the umbrella, though I’m sure I won’t need it.

The bronze bust of Joyce is no more than a block away. I approach the old man with a smile, happy to see him again. “How are you then?” I ask.

It seems to me that Dublin could do better by Joyce than the modest little bust that goes mostly unnoticed by strollers in Stephen’s Green. You can’t help but feel Joyce is getting a little shortchanged here, particularly when you admire the brilliant slumping figure of Oscar Wilde not far away. But maybe Joyce would prefer it this way. At least they don’t call him the Fag on the Crag.

From here it’s just a few block up Grafton Street to Davy Byrne’s where Leopold Bloom dropped in for a gorgonzola and mustard sandwich in Ulysses. The place has changed, obviously. They’re no longer serving the gorgonzola sandwich and the long wooden bar is long gone. I order a smoked salmon sandwich and a Smithwick’s. The beer is thick and creamy and goes well with the smoked salmon and dark crusty bread. The perfect start to a stay in Dublin. 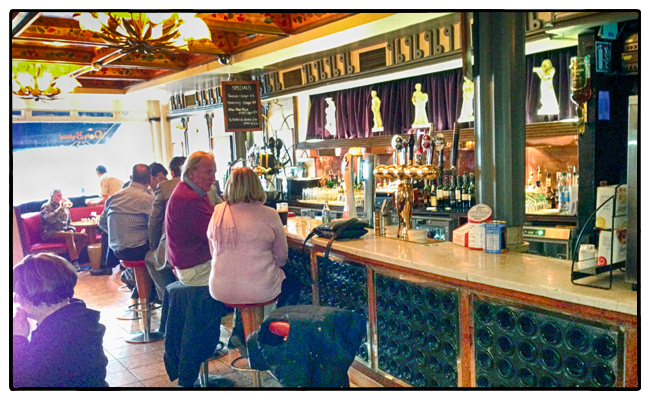 The bar at Davy Byrne’s in Dublin. 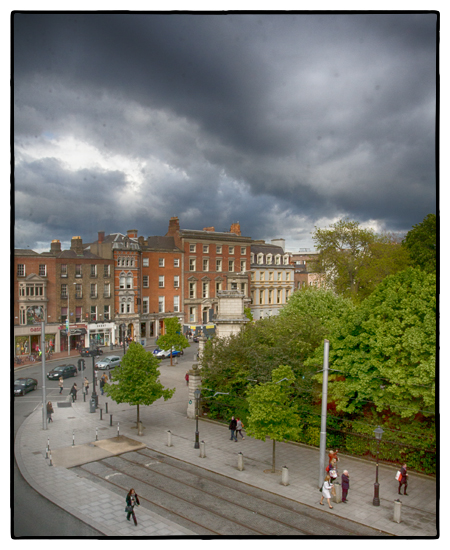 A last supper in Dublin 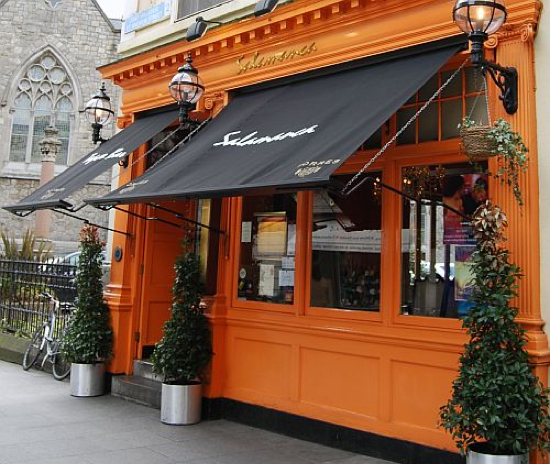 Last evening in Dublin. Mr. Lynch and I have a drink at the hotel and then walk down to a restaurant I’d noticed last night along St. Andrew’s Street called Salamanca. A tapas joint. You’d think for my last evening in Ireland I’d want lamb’s liver with bacon or a nice lamb stew but already I’m thinking of moving on and so it’s time for something different. Something spicy and exotic.

I joke around with our waitress as we order a jug of their house sangria but she’s either in a crabby mood this evening or just way too busy with other tables to be enjoying my humor. Maybe both. Don’t really blame her although it is a bit more fun when you can joke around with the wait staff. Oh well.

Mr. Lynch must be feeling famished. He orders a bowl of olives, calamari fried in chili batter, chorizo sautéed in red wine with peppers, and a chicken dish. Rather than a bunch of small plates, I’m thinking something a little heartier like paella. So I order the gambas al pil. But when it comes, it’s not paella at all. Just prawns sautéed in olive oil with garlic and chili. Not at all what I ordered. Our waitress comes over and I tell her she’s brought me the wrong dish. I ordered the shrimp paella, I tell her. Her face gets red. She puts one hand on her hip and with the other points at the menu she’s holding. You said you were thinking of the paella but then you ordered the gambas al pil, she says, a bit of anger in her voice. I asked you twice if that’s what you wanted and you said you did. It’s not a shrimp paella. We don’t do a shrimp paella. The gambas al pil is just listed below the paellas because those are the house specialties.

What can I say? She’s right, I’m sure. And not the sort of waitress who feels obligated to give the customer what he wants. Even if he inadvertently ordered incorrectly. Well, never mind. Mr. Lynch has enough food for the two of us.

Afterwards, not wanting to go back to the hotel, we wander around the neighborhood looking for a good bar. Every place seems too crowded or too seedy or just not what we’re looking for. Let’s go back to that bar we were at when we first came to Dublin, says Mr. Lynch. Do you even know where it is? I say. He doesn’t even answer. Just starts marching up the street. Gawd it’s lovely out. Still a hint of light in the sky. A bit of a chill. Up Grafton which is just chock-a-block with strollers. Down a little side street and there it is. Some anonymous little pub. A clean, well-lighted place. We order a couple of Power’s, neat, and stand outside the bar watching the people laughing and telling stories and just generally having a good time. Something the Irish know how to do well. One more round of whiskey; the sky darkens, the night gets a little colder, and, since neither of us bothered with a jacket, we agree it’s time to head back. The evening is over. As is our stay in Ireland.

The Fag on the Crag 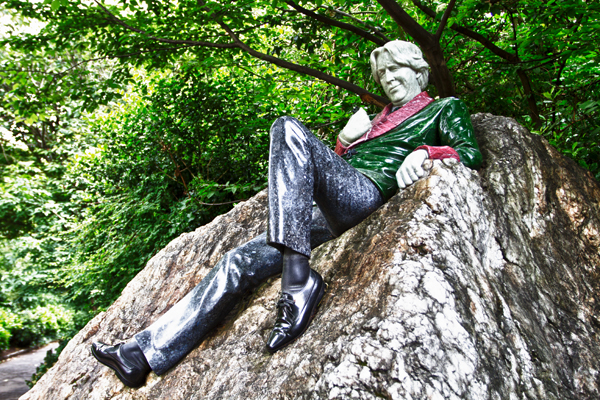 If Oscar Wilde were in his prime today, I wonder what he’d be known for. Certainly not his poetry (we don’t read poetry anymore, do we). And to be honest with you, his plays and prose weren’t much although they stirred up the literary crowd back in his day. (Speaking of his day, one of the reasons I’ve been thinking about Oscar Wilde is that his birthdate, October 16, is just around the corner; he was born in 1854 and died ridiculously young on November 30, 1900.)

“Patriotism is the virtue of the vicious.” That’s a good one. That’s something Sarah Palin should have painted on the side of her “Going Rogue” bus.

Oscar, who was married and had two children who he doted on, was also a sodomite. At least that’s what he was convicted of in 1895, not long after he sued his lover’s father, the Marquess of Queensberry, for leaving his calling card at Wilde’s club, the Albermarle, inscribed, “For Oscar Wilde, posing sodomite.” Oscar sued for libel, lost, and then was arrested by the Crown. His mother advised him to take a boat to France to avoid the trial, but Oscar wrote: “The train has gone. It’s too late.” He was convicted of homosexual acts and sentenced to prison in London. By the time he was released, in May 1897, he was both broke and broken. A pauper, he moved to Paris and died of cerebral meningitis—probably as a result of syphilis. He’s buried in the wonderful Père Lachaise Cemetery, not far from Jim Morrison.

But a spirited tribute to Oscar Wilde lounges on a boulder in Merrion Square, across from where he resided with his family from 1855 to 1876. Dubliners have a tendency to give nicknames to these tributes (the Molly Malone statue is known as “The Tart with the Cart” and James Joyce is called “The Prick with the Stick”) so it’s not too surprising that the Irish refer to the slouching Oscar as “The Fag on the Crag.” Or, if you prefer, “The Queer with the Leer.”

I think Oscar wouldn’t have minded that too much. As he said, “Always forgive your enemies; nothing annoys them so much.”

Looking for an old love 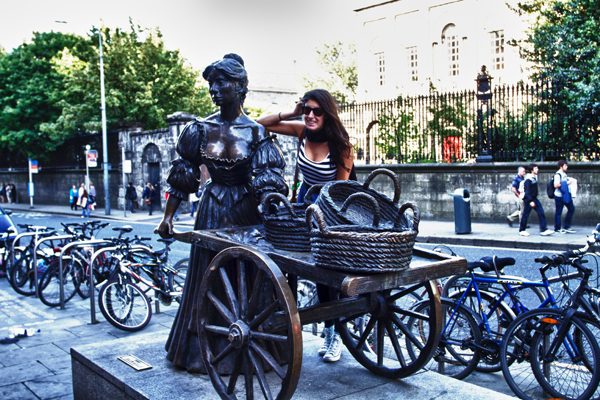 A tourist poses with Molly Malone. Photo by David Lansing.

It’s odd. I’ve still a few days left in Ireland but I can feel the trip running down. Yesterday after we’d gotten Danny-Boy back to the Cartron Farm and headed for Dublin, I was so tired that I immediately fell asleep in the car. It’s not so much that I didn’t sleep much in the gypsy caravan (although I didn’t) as it is just the emotional letdown that always comes at the end of a trip for me. Even a trip that isn’t quite over.

I woke up just in time to see that we were heading for the city center so I grabbed a map to see if I could direct Mr. Lynch to our hotel, the Brooks on Drury Street. I found it on the map and figured out the best route to get there but even with all that preparation we got lost again. Maybe that’s just our karma in Ireland: to be forever lost.

I was looking for the Grand Canal so as we could swing by St. Stephen’s Green (familiar turf to both of us) but next thing you know we’ve crossed the River Liffey and we’re on the wrong side of Temple Bar. Ah, well.

Still a few hours of late summer light left by the time we checked in to our rooms and so it wouldn’t do to just stay in the hotel until dinner. I wanted to have a look around. Soak up the last of Dublin. Down to St. Andrew Street I strolled, mobbed by the locals just getting off work and meeting friends at the pubs and bars along Grafton Street. Something buoyant about a city like this that is so alive. You don’t know whether you want to find a bar and order a glass of wine while observing the comings and goings all around you or just jump in to the tide of pedestrian traffic and go with the flow.

What I did was follow the crowds around Trinity College looking for an old love of mine. Miss Molly Malone. Bit of a tart, that one, but a sweet girl. Hadn’t bothered to say hello when I first came through Dublin so thought it best to look her up, now that my time here was short. And there she was. A fine looking woman. Her hair done up atop her head and that lovely blousy gown showing off her best assets. Forever pushing her cart of cockles and mussels up Grafton Street. And gawd the crowd she draws. All gawking at the wench. Mostly women. Climbing up on the pedestal to put their arms around her, have their pictures taken. Show the folks back home: Look, that’s me there with Molly Malone. Who has the better rack do you think?