Hearts of Hawaii at the farmers’ market

As much as I dig the foodie aspect of the Kapiolani Community College Farmers’ Market, I’m also envious over the flowers. Envious because locals come here and walk away with boxes of orchids, like phalaenopsis, for about $8 each when I’m happy to pay $15 or $20 at home. 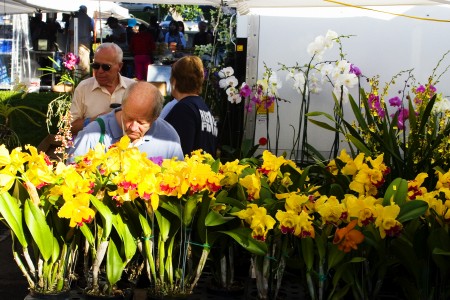 And if they have half a clue as to what to do with them, these gorgeous butterfly orchids (which are easier to grow than roses, particularly in this climate) will not only bloom for years but, with just the slightest bit of care, can easily flower twice in a season. What a bargain compared to cut flowers which you stick in a vase and you’re lucky if they still look good a week later.

But what really amazes me are the cattleya. Now that’s a temperamental orchid. I’ve got eight or nine in my greenhouse but I don’t think any of them have ever bloomed. Then you come to the farmers’ market here and they’re like $20 for a gallon-sized plant. That would be a good $50 or $60 most places. 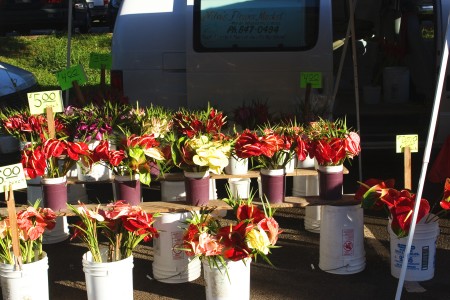 While I’m most enamored with the orchids, there are so many other beautiful flowers here, such as the almost-obscene looking anthuriums, known as “the hearts of Hawaii,” which come in every shade of red as well as green, purple, orange, white, and a golden yellow (they say there are over 500 species of this tropical). Or the fragrant gingers which you can crush in your hand and they bounce back unfazed.

People were walking out of here with big bouquets of proteas, which look like colorful artichokes to me, and various heliconia, or lobster-claws, whose waxy bracts look resembles the plumage of tropical parrots.

And it was almost impossible to find a bouquet costing more than $5 or $6—what a steal!

When I woke up Saturday morning, I started having second thoughts about going out to the farmers’ market at Kapiolani Community College. For one thing, the day was gorgeous and I kind of felt like just throwing on my swim trunks and going for a long swim. For another, the market is far enough from Waikiki that it would necessitate driving, which meant getting my rental from the valet and that whole hassle. But I kind of kicked myself in the ass and took a quick shower and humiliated myself into going by calling myself a lazy ass.

It was a good decision. I’ve been to farmers’ markets all over the world but this has to be one of the best. Even though there’s really not all that much in the way of fruit or veggies. It’s more about the food. In fact, they should probably call it the Honolulu Foodies’ Market to better reflect the experience. Absolutely everything here has to be grown or produced in Hawaii, which is very cool. 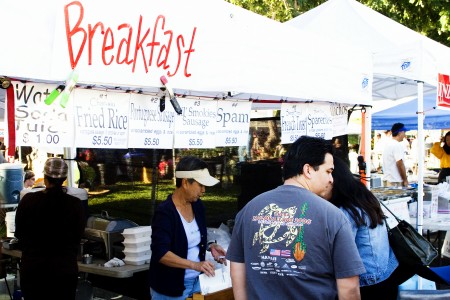 The thing to do is to make a circuit of the market and check out the vendors, kind of letting your nose and your eyes guide you, before you start eating. Otherwise, it will be like loading up on the rolls and potato salad at a buffet bar before you get to the prime rib table.

If you’re going to have breakfast here (and you’d be crazy not to), you have to decide whether to pace yourself and go with some finger food like a little mangobread or sweet potato Danish or go for something heartier like fried rice with Portuguese sausage. 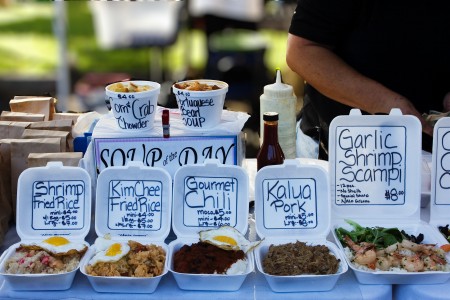 My head told me to grab a cup’a Kona from Koko Crater and a banana muffin from Happy Cakes, but then my heart (or was it my stomach?) spotted the Styrofoam containers of food fronting Hawaiian Style Chili Co. Kim chee fried rice, kalua pork, taro mochi. In the end, my gut over-ruled my brain and I got the loco moco chili—a big scoop of chili on a mound of rice, topped with a fried egg.

Here’s what you do at the Kapiolani Community College Farmers’ Market: you walk around until you find some good grinds, sit and chow down, then walk around looking for something else to eat. Repeat until full.

I didn’t even try to finish my loco moco chili. Way too much starch and carbs. What was I thinking? I needed to cleanse my palate. So I wandered over to Two Hot Tomatoes to have some of Barbara Sant’Anna’s fried green tomatoes. 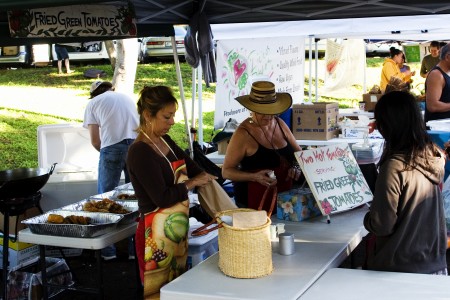 Frankly I’ve never been a big fan of fried green tomatoes (okay, the tomatoes are green and there’s just something unappealing about that, and, secondly, the crust is always mushy), but Barbara’s secret trick is to fry the tomatoes in a panko breading so they come out crunchy and airy. More like tempura.

Those were good (although, again, I didn’t bother to try and finish the whole thing). Then, after grabbing a fresh gingerale lemonade from PacifiKool, made from their Hawaiian-grown ginger syrup, I got in line at the North Shore Farms booth for a slice of Jeanne Vana’s pesto Neapolitano  tomato and mozzarella pizza. Probably didn’t need this since I still hadn’t digested the loco moco chili (if, in fact, that’s even digestible) or the fried green tomatoes, but what the hell.

There are two things that make North Shore Farms pizza winnah of da winnah (best of the best): Jeanne’s Waialua Big Wave tomatoes, which she grows only in winter on a 10-acre farmer’s co-op on the North Shore on land that used to be a sugar plantation, and her pizza oven—which is actually just a portable gas bbq grill. 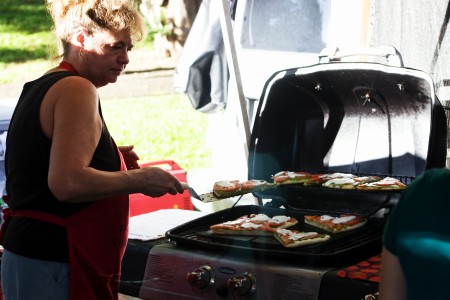 Jeanne calls her pizza Neapolitano, probably because, like a true Neapolitan margherita pizza it’s made with just four ingredients: tomato, mozzarella, basil, and olive oil. But Jeanne’s bbq’s don’t get hot enough to turn out a true crispy crust (a true Neapolitan pizza gets cooked in a 900° stone oven for less than two minutes). So while her crust is a little more limp than I like, the Big Wave tomatoes are unbelievable. A true loco moco pizza.

Cheese pie and stuffed figs at the Bodrum market 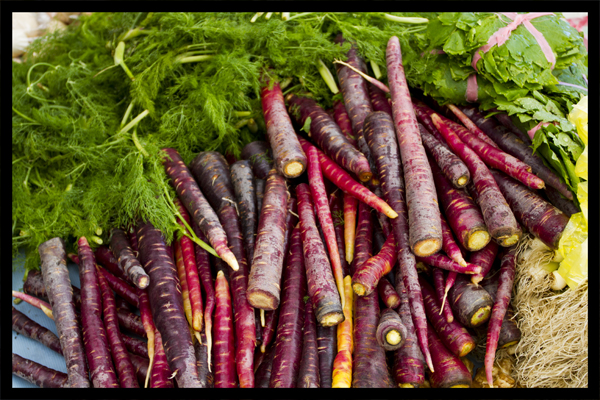 Red carrots, covered with fresh dill, at the Bodrum farmers' market. Even Sidar said he had never seen carrots like this. Photos by David Lansing.

More about the farmers’ market in Bodrum yesterday: It was kind of like a moveable feast for me. I’d stop at one stall and buy a little bag of cherries, eating them while I walked around some more, and then maybe buy a few cashews, some plump dried apricots, a few olives, and even a peynirli börek (cheese pie).

About those dried apricots: I don’t know what they do to them, but Turkish dried apricots are the best in the world. I fell in love with them in Istanbul and now buy them wherever I see them (and you see them a lot). 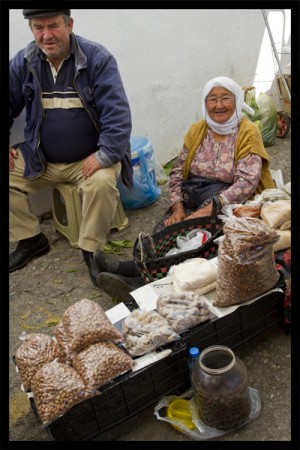 One of the other wonderful things I found at the market were dried figs stuffed with sesame seeds and almonds. They were being sold by this little old lady named Elif. As I got near her stand, she practically grabbed me by the arm to drag me over to taste her figs. To be honest with you, I took one just to be polite. But Elif knows her figs. These were incredible. And so I ended up buying a dozen of them. I think the trick is going to be making sure I don’t scarf them all down at one time back in my hotel room. They’re that good. 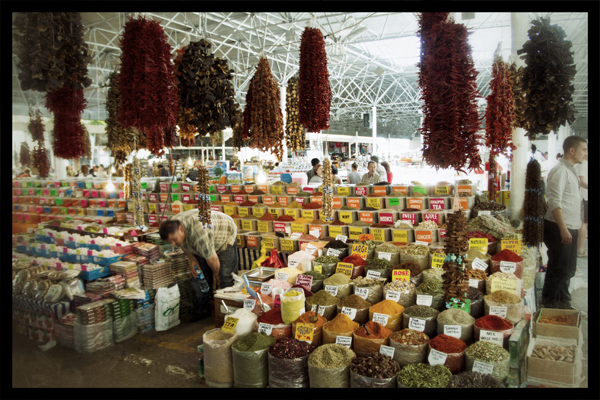 The Bodrum farmers' market on Fridays. Photos by David Lansing.

My favorite thing to do, no matter where I am, is to go to the local farmers’ market. Everyone has one, right? And you see things there that you won’t see anywhere else. So this morning I asked Sidar if there was a farmers’ market somewhere around Bodrum and he said, Of course.

“There is the one in Güvencirlik on Monday, and the one in Ortakent on Wednesday, and yesterday there was one in Bitez.”

“So there are no farmers’ markets on Fridays?”

This is how it goes with Sidar. He loves to yank my chain. 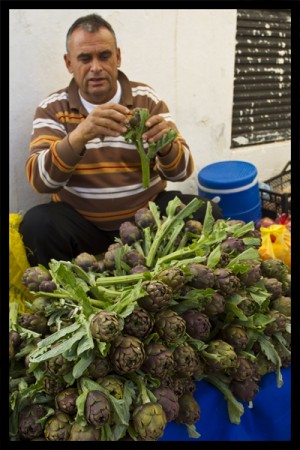 An artichoke farmer at the Bodrum market explains the health benefits of enginars to me. Photo by David Lansing.

So this afternoon, after lunch, we went to the farmers’ market which is held in a big covered building , sort of like an indoor parking garage, in downtown Bodrum. It was fantastic. The first thing that caught my attention was the guy selling small artichokes. They came with a foot or more of their stems and were piled stylishly in a mound. Using Sidar as a translator, I asked the farmer how Turks normally prepare artichokes. He said that they are usually poached in olive oil, sometimes with fava beans, almonds, and tomatoes, but with these artichokes, he would recommend slowly simmering them in water along with their stems and then drinking the soup. Very good for the kidneys and liver, he said. And also for other ailments. Like indigestion or ladies’ curse.

Well, I don’t have to worry about that. But I thought it was an interesting way for the guy to market his purple-tinged artichokes (called enginars in Turkish)—as a holistic health cure. I could just imagine a sign in my local supermarket back home indicating that not only were artichokes on sale for a dollar a piece this week but if you made a broth from the stems, it might take care of your cramps. Just imagine.