A child in saffron robes 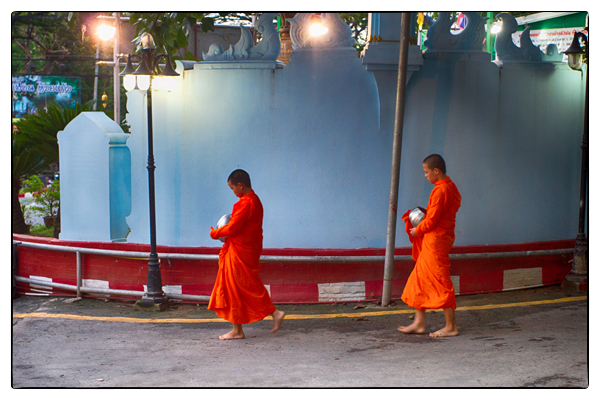 Novice monks walking with their alms pots early in the morning. Photo by David Lansing.

It’s an odd thing, feeding the monks. Ketsara, who has bought a tray of monk food (it’s a bit like feeding the sheep at the petting zoo) was standing on the side of the road, trying to keep warm. The sky was just starting to lighten up but the street lights were still on. There were dogs in the street and bicyclists panting and grunting as they started the ascent of Doi Suthep. And then suddenly the first little monks appeared. I don’t know where they came from. It was just like one moment there were no monks and the next there would be two or three coming down the street, stopping in front of the tables with food, looking down at their feet as a fried fish or a sticky bun was dropped in to their pail.

Actually, I don’t think any of these Buddhists were real monks. They looked too young—some couldn’t have been more than 10 or 11. They were probably novices.

Thailand has over 200,000 monks and 85,000 novices. (Young boys can become novices at any age, but you cannot become a monk until you reach the age of twenty). What people probably don’t know (I didn’t) is that once you become a monk, it doesn’t mean you’re a monk forever. You can be. But you can also be a monk for just one day, if you want (I hear that three months is more usual).

In Thailand, being a monk is kind of like going to school. It’s something you do and then you move on. In fact, many of the young boys become novices because it’s the best (and least expensive) education they can get. Their families put them in a monastery because they can’t afford to send them to school. Then, after a year or two years, they leave.

So here’s the ritual: The monks (or novices) walk single file, oldest first, carrying their alms bowls in front of them. Laypeople, like Ketsara, wait for them, sometimes kneeling, and place food, flowers, or incense sticks in the bowls. It is very important that women not touch the monks (too much damn temptation!).

The monks do not speak, even to say thank you. The giving of alms is not thought of as a charity. The giving and receiving of alms is supposed to create a spiritual connection between the monastic and lay communities. The monks never look at you directly—they just walk up, wait to receive their food, then walk away. It seemed oddly lacking in emotional energy to me, but when Ketsara was done giving the monks food, she came back to me looking like a new bride.

“We are blessed,” she said.

She may have been. I’m not so certain about myself. 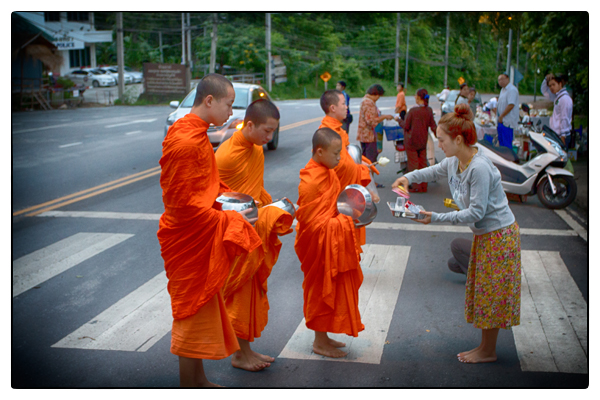 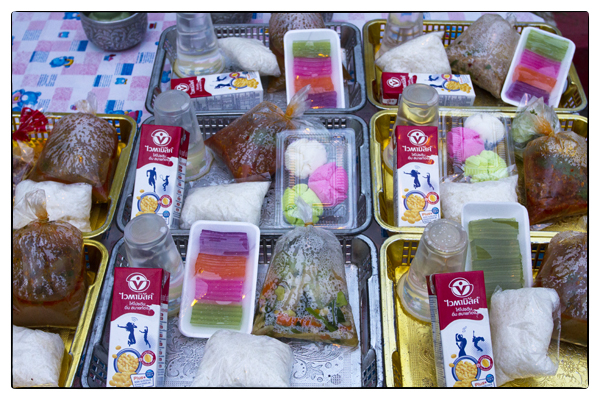