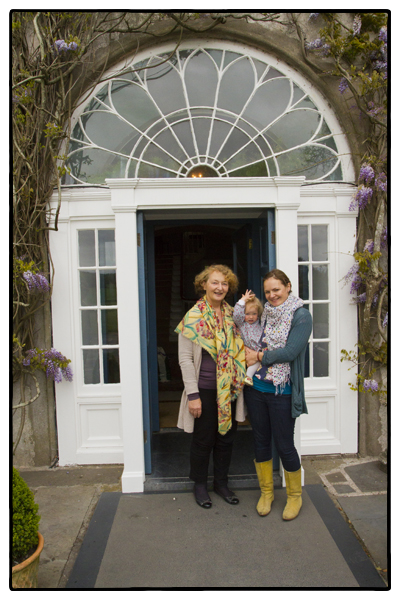 So what’s a Ballymaloe? It’s a country inn. And a restaurant. And a cooking school. The original house dates back to 1450 (although it was recently remodeled in the eighteenth century) and is set in the middle of gorgeous Irish countryside just a mile or so from the little fishing village of Shanagarry, about half an hour south of Cork. The whole thing is run by the Allen family. One runs the hotel, another the cooking school, and so on.

As you walk around the property you’re bound to run into one Allen or another pouring tea, feeding the chickens, or stumbling along in the lobby (that would be Ruby, the youngest Allen, who just took her first steps two weeks ago but seems bound and determined to get out there and help out along with the rest of the family).

Yesterday morning when we were at breakfast, a lovely middle-aged woman came by the table and asked us if we’d like some fresh cream on our porridge. The thick yellow cream was in a Mason jar. “It’s from this morning’s milking,” she said. She wasn’t kidding. She dribbled some of the cream over my porridge and then on my fresh strawberries (from the garden), and eventually on my still-warm scone.

This was Hazel. Who is basically in charge of the hotel end of things. I thanked her for the fresh cream and then she was off. To offer cream from cows milked less than two hours ago to the other guests.