Salmon marshmallows and beet macaroons at The Cliff House 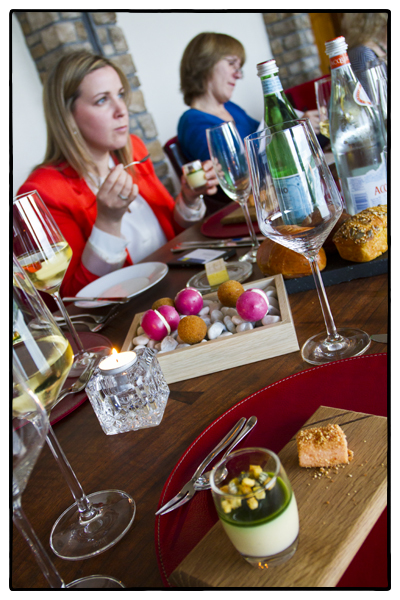 Here’s what it says on the menu at the Cliff House restaurant in Ardmore, called The House: “Martijn Kajuiter, our Executive Chef, has sourced as many of our supplies as possible from as local an area as possible, even going so far as to grow our own vegetable garden…From Tadgh O’Foghlu’s honey in nearby Ring, David Brown’s fresh fish from Helvick and Ardmore Bay, to Sean Twomey and Michael McGrath, our butchers in Youghal and Lismore, the quality of the produce has given Martijn the inspiration to cook dishes that can rely on the seasonality of the ingredients.”

Well, you have to love that. I mean at home, my own cooking revolves around whatever I’m currently harvesting in my garden, whether it be peaches or heirloom tomatoes, arugula or Italian Roma beans. But I have to admit that I’m not a big fan of the Ferran Adrià-style of molecular gastronomy. So I was a little taken-aback when the starters arrived at the table. 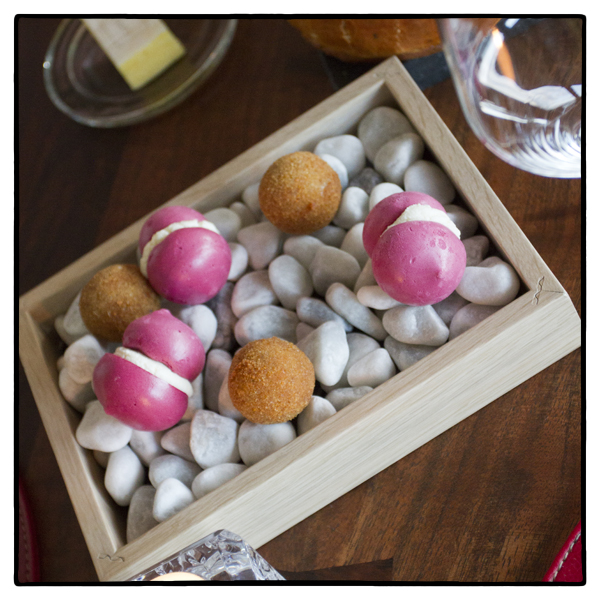 A box of beet macaroons. Photo by David Lansing

First off, we got a plank of alder with a salmon marshmallow on it, a big gooey square of orange with overtones of fishiness. That was followed by a square rock garden topped with Easter egg-colored beet macaroons.

Really? This is what we do with the gorgeous salmon caught by David Brown in Helvick and Ardmore Bay? We turn it in to marshmallows? And the lovely beets Martijn grows in Youghal are transformed into puffy macaroons?

This may be great fun for chefs who have perfected the art of perfectly-poached Irish salmon and want to do something out-of-the-box to show their skills, but I think the only people at the table who professed a love of Kajuiter’s fishy marshmallows were infected with a bit of “emperor’s new clothes syndrome.”

That said, once Kajuiter was done showing off, the rest of the dishes were outstanding, from the plump West Cork scallops that were lightly seared, just for a minute or two, and served in a puddle of green peas, bacon, and garden herbs, to the moist Helvick cod, baked with its skin on, and seated on a light sauce of brown crab and saffron sauce.

Now if only Kajuiter (and other chefs) would get back to truly bringing out the essence of all the ingredients they work with and get over proving that they can make marshmallows that taste like salmon.