The Girls were having a tough time figuring out where we should take our comida in San Sebastian. They were like Goldilocks—Los Arrayanes was too stuffy; Los Arcos too rustic. Meanwhile, I went back to the cantina across from the plaza and had a shot of raicilla with the borrachos. 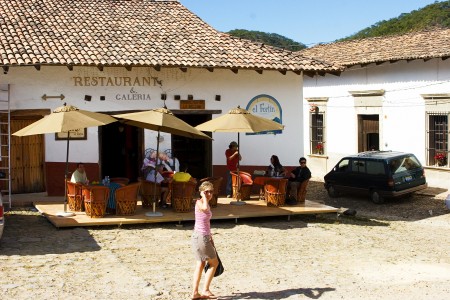 I’ve had raicilla on a couple of other occasions and every time I drink it I wonder why. This local Mexican moonshine, which, until just recently, was illegal, smells like kerosene and tastes even worse. There’s an old story that while John Huston and Richard Burton were filming The Night of the Iguana back in the early 60s, they got hammered on raicilla and Burton made the remark that he could feel the potent fermented mash coursing through every part of his intestines. Huston assured him that was just the cactus needles in the drink.

Here’s another one of my favorite dichos, this one particular to Sierra Madre towns, like San Sebastian del Oeste, Talpa, and Mascota, that have been making raicilla since before anyone had ever heard of tequila: Para todo mal, raicilla; y para todo bien tambien. Which means, For everything bad, raicilla; and for everything good too. (By the way, some readers have sent me some of their favorite dichos as well. This one comes from kendralis@yahoo.com: Tu eres como un pulpo en el garaje; You’re like an octopus in the garage, which means “You don’t fit in.”)

They say you can have a couple of shots of raicilla and you won’t notice any effect—until you try to stand up. I can testify to the truth of this.

Once The Girls had rescued me from my borracho friends and safely maneuvered me across the street to El Fortin, where they’d finally decided we’d have lunch, I immediately insisted on them sampling the homemade raicilla of Gabriel, the owner, if for no other reason than equaling the conversational playing field for me. Gabriel told The Girls that he had been working on inventing a new cocktail, to be called the El Fortin, using his raicilla and a passion fruit liqueur, both of which he makes and sells at the restaurant. The Girls ordered the drinks (I switched to cerveza in an effort to rediscover my tongue). The cocktail was okay—a mix of the raicilla and passion fruit liqueur topped up with sparkling water. But the color—“Gerber’s Yams” I’d call it if I had to give it a name—was wretched. 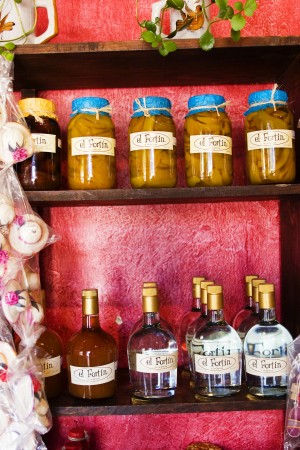 The Girls, however, were just thirsty enough from their exploration of the town that they downed the drinks rather quickly. And then ordered another. “Put a little more alcohol in it,” they urged Gabriel. “We could hardly taste it in the first one.”

He smiled. As did I. I think The Girls are going to catch up with me rather quickly.