My father was more Jackie Gleason than David Niven, more Walter Matthau than Fred Astaire. Sort of the blue-collar Frank Sinatra, I guess you’d say, a man who loved meatloaf, Herb Alpert & the Tijuana Brass, and playing ping-pong. He admired Steve McQueen, never owned a suit, and always won a free turkey around Thanksgiving in his bowling league. Always.

Oddly enough, his drink of choice was a Manhattan, which, even as a kid, I sort of admired and was embarrassed by at the same time. I’ll tell you a story: When I was 10, maybe 11 years old, I used to go with my dad on Thursdays, league night, to the bowling alley where I’d get paid a buck plus all the cherry cokes I could drink to keep score for my father’s team. All these guys—most a little younger than my dad—would down Coors all night, but not my father. He’d order a Manhattan from the gum-smacking bar girl, and she’d bring it to him on the rocks in a plastic cup. At this point my father would pull out from his shoe bag a ridiculous cocktail shaker adored with drink recipes. He would dump in the contents of the cup, then strain the drink into a ribbed martini glass, which he also kept in his shoe bag. Finally he would pull out an old jam jar of brandied cherries he’d preserved himself and plop one of the scarlet bombs in his glass and another in my coke. 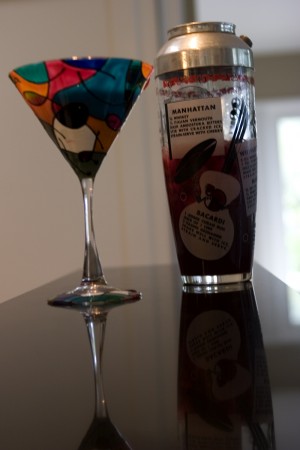 He called my drink a virgin Manhattan—“Which, as you’ll discover, is a very rare thing”—chuckling as he clinked my glass. This is the part that always embarrassed me: the clinking of glasses, the lame joke. This is the part I admired: His bowling buddies always treated him as if he were a bon vivant and I a young prince. It left an impression.

But I came of age in a time of Harvey Wallbangers, tequila sunrises, and California wines hawked by a bloated Orson Welles. The first time I had a real Manhattan was at my father’s funeral. I liked it immensely, which rather surprised me. I liked the way the rosy hue of sweet vermouth deepened the amber color of the whiskey. I liked its smoky sweetness, the way just the slightest sip filled my mouth with lubricious lushness. Most of all, I liked the way it made me feel on a day when much seemed lost in my world: comforted, calm, stoically philosophical. From that day forward, my father’s Manhattan became my signature drink. 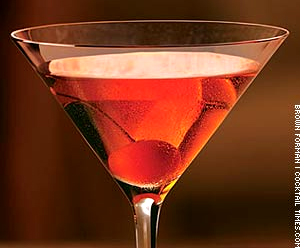 The Manhattan is the Cary Grant of cocktails. The most charming, the most elegant, the most sophisticated of libations you can order. It is, quite simply, the finest cocktail on the face of the earth. It’s the grandfather of the martini and the sine qua non of all French-Italian cocktails. It’s also inherently sexy (though I’ve yet to meet a woman who can actually tie the cherry stem into a know using just her tongue).

The Manhattan has gone through a number of permutations over the decades—from rye, originally, to Canadian whisky during Prohibition, to my father’s preference, bourbon. And there’s always been disagreement over the type of vermouth to use—and just how much. The story goes that the original Manhattan was made with equal amounts of both dry and sweet vermouths, and this is still called a Perfect Manhattan, though in my mind there’s nothing perfect about it.

My father made his with Italian vermouth, as called for on the recipe of his goofy cocktail shaker. Back then, people referred to dry vermouth as French and sweet vermouth as Italian because that’s where they came from. These days there are all sorts of vermouths out there, including sweet whites, so you have to be more specific.

Now, about the whiskey. Hardly anyone makes a rye Manhattan these days, largely because hardly anymore makes rye whiskey. But if you order a Manhattan back East and don’t specify the liquor, most bartenders will use a Canadian whisky—usually Canadian Club—which they will tell you is a rye whiskey.

Almost all Canadian whiskies are simply blended, which means they come from a number of different barrels (Crown Royal, for instance, creates its blend with as many as 50 whiskies). If you ask me, using a blended Canadian whisky to make a Manhattan is like using surimi to make a crab salad—please don’t do it. Order a straight bourbon. Something like Maker’s Mark or Knob Creek is fine.

When my father died, I inherited two things: his old cocktail shaker, which I still use, and his recipe for what truly is the perfect Manhattan. Shake exactly one drop of orange bitters into a martini glass and swirl it around. In a cocktail shaker half-filled with crushed ice, add two shots of bourbon and one shot of Martini & Rossi sweet vermouth (I find Cinzano a little too robust and Noilly Prat too cloying—you want to taste the bourbon, not the vermouth). Swirl the mixture around but don’t bruise it; you don’t want a cloudy Manhattan. Strain into a martini glass and add a maraschino cherry. Take a sip. Then start spreading the news. The perfect Manhattan. A gift from my father.