Hórreo: The symbol of Galicia We are driving through the Galician countryside to visit a winery in Rias Baixas, about an hour and a half outside of Santiago de Compostela. The terrain is green and rolling, the valleys cloaked in fog. Every once in awhile the road climbs, we get above the fog line, the sun is suddenly intense, and there sitting on the rocky hillside is a barn on stilts. A hórreo, the singular symbol of northern Spain. Some are made of wood; others of stone. They are square or rectangular or even round. Their roofs are thatched or tiled, pitched or double pitched. In other words, there is no singular architectural image of what constitutes an hórreo. Except that they are all built on stilts, usually stone pillars known as pegollos. 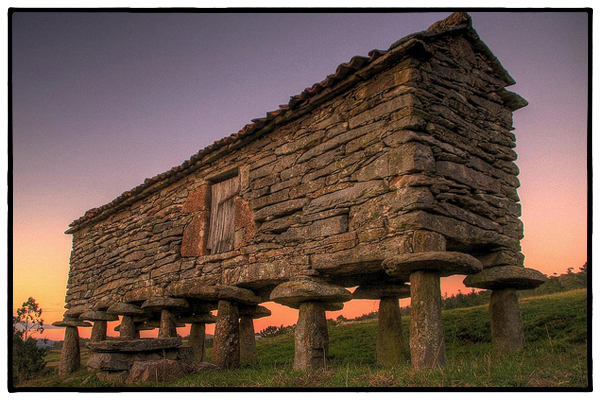 They say the hórreo was brought to Spain from the Roman Empire. Originally they were used as granaries, their elevation above the ground necessary in this the wettest part of Spain. Every once in awhile we come across a hórreo still being used to store corn or hay, but more often they hold firewood or chickens or even bikes and gardening equipment. Some have been turned into country houses; others look abandoned and sit listing on the side of a grassy hill, charming monuments to the days when the Roman Empire passed this way. 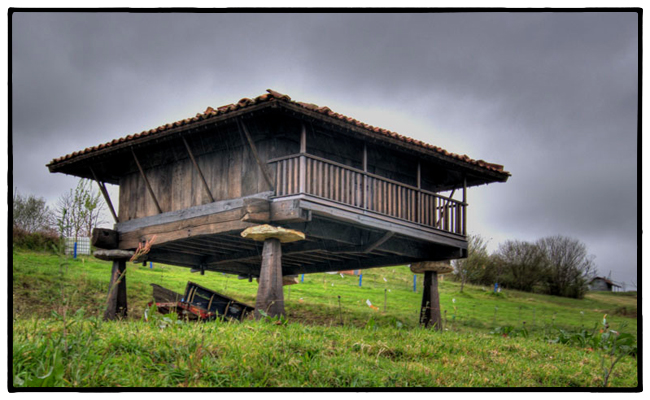 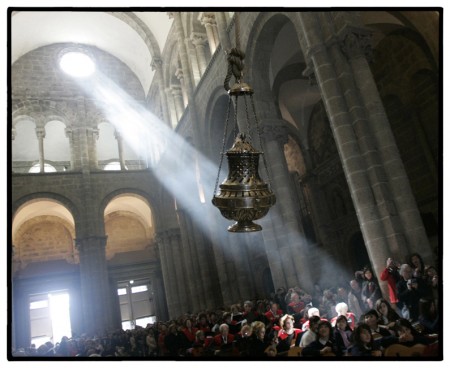 The giant Botafumeiro in the cathedral at Santiago de Compostela.

I had to go to mass today. Not because of all the nasty things I said about people who believe the fairytale about St. James’s body being discovered by a crazy religious nut back in 813 (769 years after he was beheaded in Jerusalem), but because they were going to bring out La Alcachofa Grande—The Big Artichoke.

The Big Artichoke is a thurible. A thurible is a censer—one of those things you put incense in and swing around in church to make everybody get all mystical. I was an altar boy when I was a kid and I loved being the guy that got to swing the censer around. It was like being Merlin.

Anyway, the thurible at the cathedral in Santiago de Compostela is so honkin’ big that its nickname is The Big Artichoke (but it’s officially known as the Botafumeiro). The Botafumeiro weighs over 175 lbs. and is over five feet tall. The eight guys that swing it, called tirabeleiros, use shovels to fill it with 80 pounds of charcoal and incense. You have to see this thing in action to really get an idea of what I’d talking about (see the YouTube clip below and watch what happens to the tiraboleiro at the end when he catches the Botafumeiro to stop it from swinging).

They started using this giant censer back in the Middle Ages when all these stinky pilgrims were arriving from all over Europe after making their pilgrimages to Santiago de Compostela. Of course the first thing they’d want to do was attend mass in the Catedral del Apóstol. But they smelled like dead goats and many had various diseases (see my earlier blog about the hospital that was built for these buggers which is now a luxury hotel), which didn’t make it real pleasant for the locals.

So what to do?

Build a gigantic thurible and swing it from the roof of the church over the unwashed masses. It wouldn’t clean them up but at least it would mask the stink in the church. Besides, it was thought at the time that the incense smoke had a prophylactic effect against things like the plague (which wiped out something like 30-60 percent of Europe’s population in the 14th century). So swing away! 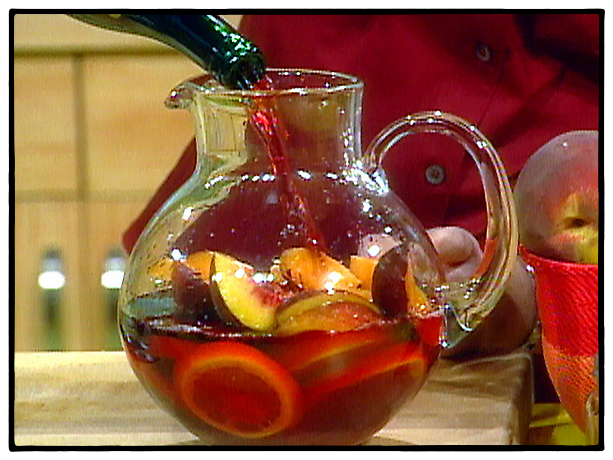 The following is an excerpt from the excellent Lonely Planet book, World Food: Spain:

The wines of Spain were not always of the high quality we have come to expect these days. When they were good, of course, they were very, very good. But when they were bad—Diablos! But instead of wasting it, the Spanish would take the bad wine and put something into it to mitigate the taste. Sometimes it was just water, sometimes it was other wine, often it was spices or fruit juice.

Over time a few recipes came into being that pleased most and offended none. To this day, sangría is an idea, not a chemical formula. Some people might use apple juice, or pineapple juice. Others might use nutmeg, or cloves. But a fairly standard recipe calls for citrus and cinnamon. How much of this or that to add to the wine depends on the wine—how good, how bad, how sweet, how dry. The final product should be refreshing and quaffable. Unfortunately, when served in tourist restaurants it is usually cloying sweet.

Take a 5cm strip of zest from a lemon and one from an orange. Place them and the cinnamon in a large pitcher along with the wine. Squeeze the fruit, add the juice, and stir well. Let the mixture sit in the refrigerator for at least an hour. Stir in the ice, then add the soda or lemonade just before serving. 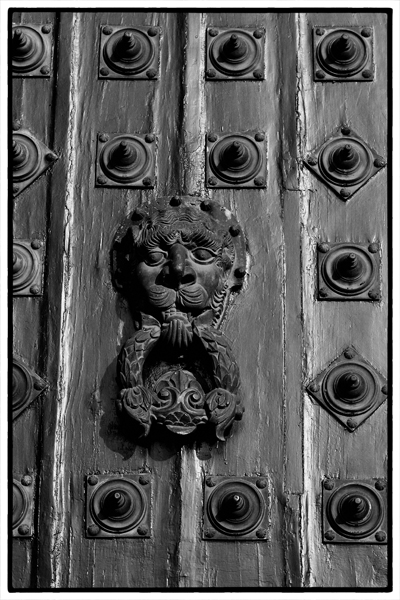 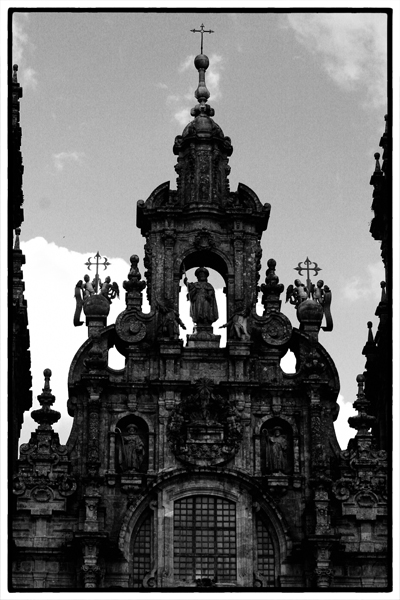 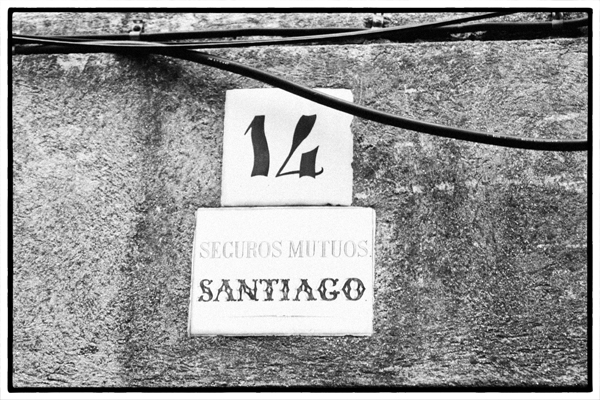 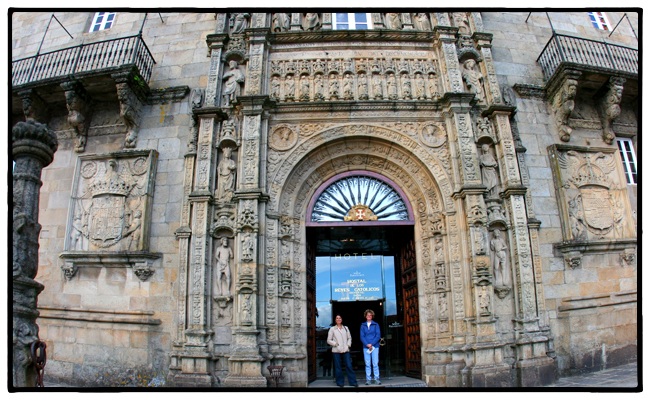 I am staying at a nunnery, the Parador Hostal dos Reis Católicos, in Santiago de Compostela. Actually, it’s not a nunnery. It just feels like one (maybe because there are so many nuns walking around here). It used to be a hospital. Does it make me feel better to know I’m staying in a former hospital rather than a nunnery? I don’t think so. My room is elegantly spartan, if there is such a thing—a plain wooden double bed, stone floors, some religious art on the wall—and last night I fell asleep imagining that I was in the room of the former Mother Superior. And who knows? Maybe I was. Even when it was a hospital, there were a lot of nuns living here.

The parador bills itself as the oldest hotel in the world. But that’s using the word “hotel” in a very loose sense. It was actually built in 1499 by Ferdinand and Isabella because they were tired of so many pilgrims sleeping on the streets of Santiago every night (this might be the oldest documented case of a government trying to deal with the homeless). Eventually it became evident that most of the pilgrims sleeping in the streets were also dying. Pneumonia, tuberculosis, bad blisters—you name it. So it became a hospital. And remained so until Franco had it converted into a parador in 1953.

I don’t know. To me, it still feels like a nunnery.