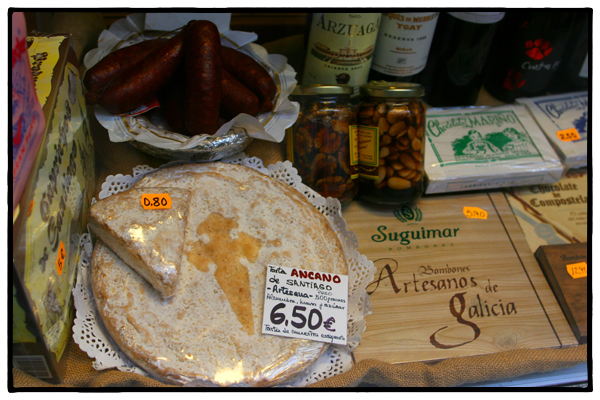 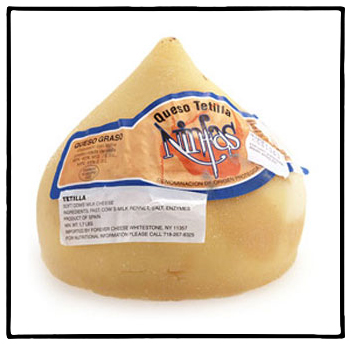 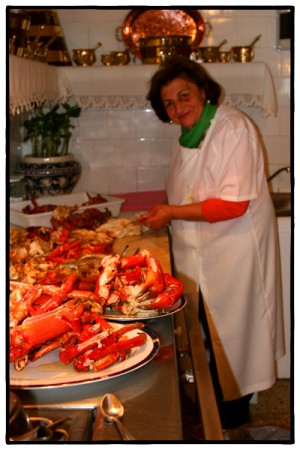 Driving around yesterday afternoon, I was starving. Was it the dewy green hills dotted with spring lambs and baby calves that made me so ravenous? Or the rivers and estuaries with their perfumed air of salt and seaweed? Or maybe it was Eva describing in minute detail how her grandmother would prepare Galicia’s signature dish, pulpo a la gallega.

“As a little girl, I would watch her dip it in the hot water, take it out, dip it in again, take it out. On and on. You see, it’s all about cooking the octopus at the right temperature for the right amount of time.”

And then she would tell me about some of her other favorite Galician dishes: the sweet berberechos (cockles) and the tiny, much-prized goose barnacles known as percebes, “Which look like your fingernails, oh, and the centollas! Oh my god how I loved centollas!”

Centollas, she told me, were “something like spider crabs, only bigger and sweeter.” And she knew just where to get them: at a little hole-in-the-wall restaurant in Cambados where the ria de Arousa, one of the five rivers that make up the Rias Baixas, flows into the Atlantic Ocean.

It took us awhile but after stopping and asking for directions a couple of times, Eva found the restaurant she was looking for: Posta do Sol. It was still early (not yet two) so we got a good table, close to the open kitchen where we could see (and hear) an old woman smacking giant crab claws with a large cleaver. “You see?” said Eva excitedly, “Centollas!” 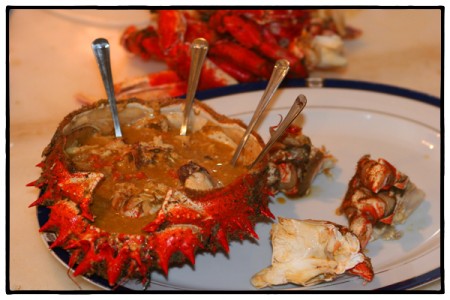 This is how you eat the spider crabs at Posta do Sol. Photo by David Lansing.

The old woman smacking crabs was named Maluca Duran. She wiped her hands on an apron that looked more like a surgical outfit, covering her from neck to feet, and chatted with us. The restaurant, which she started with her husband, had been there for 45 years, she said. “No,” said her daughter who had joined us. “More than that.”

Maluca shrugged and smiled. “Who can remember?” she said.

It was still a family-run restaurant, said Maluca, who told me her real name was Amalia, “But people call me Maluca,” and who admitted to being closer to 80 than to 70. Her daughter, Masu, waited tables and helped cook. Her son-in-law, Manolo, was the bartender and also helped bring food to the table.

“Go sit!” said Maluca. Without us ordering, food suddenly began to appear at our table. First a plate of bright orange shrimp, their heads and tails still on, and then bowls of tasty mussels and the famous goose barnacles, and finally platters of the local centollas which were every bit as sweet and juicy as Eva had promised, all washed down with a couple of bottles of local Albariño. A meal fit for a king. All I wanted to do afterwards was take a nap. But Eva had other plans for us.

Cocido: The dullest dish in Spain? 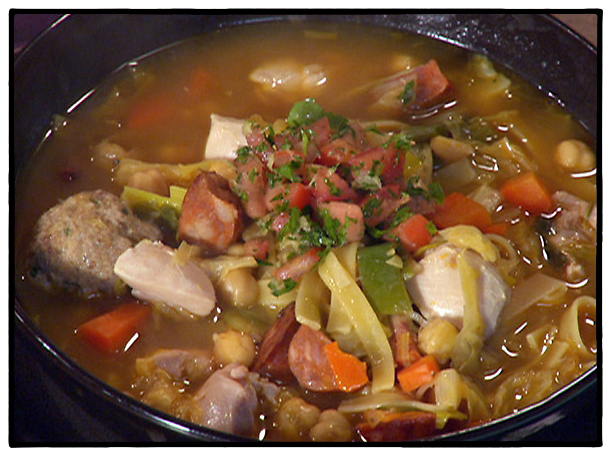 Cocido, the dullest dish in Spain.

The following is an excerpt from the excellent Lonely Planet book, World Food: Spain, which, sadly, is out of print:

Now to that other famous Madrid-style dish, cocido a la madrileña. The word ‘cocido’ is simply the past participial form of the verb, to cook. It is a stew of chicken, chorizo sausage, maybe some ham or other cured meat, potatoes, cabbage and chickpeas and macaroni. Eat a dinner of it and it will seem to stay with you for three days. It is typically eaten ‘from front to back,’ starting with the broth along with the macaroni or rice, then you eat the chickpeas, then you eat the meat. You can do this at one meal, or you can do it over a span of three days. We recommend the three day approach. We have never seen anybody stagger from the table having downed an entire dinner of cocido. It is sometimes referred to as the ‘miracle of the loaves and the fishes’ because though there might not seem to be enough as you look at it, in the end everyone is full and there is always some left over.

But this is about the dullest dish in Spain. There are so many good things to eat that we don’t know why any non-Spaniard would bother with cocido except as an experiment in culinary anthropology. It’s not that we think it bad. It doesn’t have enough taste or smell to be bad. Its long cooking in much water seems to strip its good parts of their native goodness. And yet the Madrileños swoon for this stuff. They dream of it when away from home. They even compose songs to it. We tell no lie.