Get up and dance at Taberna de La Muralla

It was almost impossible to find a table at the Taberna de La Muralla, the only brewpub in Havana, yesterday. The wrought-iron tables on the edge of the gorgeous Plaza Vieja were jammed, with many people standing about shadowing tables, waiting for someone to leave, so we went inside and even here where you can almost always find a table, there was nothing available until about a dozen Cuban women, all a little drunk and having a good time, squeezed in making room for us at the end of a long plank table. 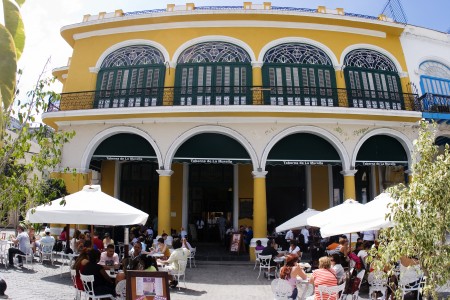 The thing to do at the Taberna is order a dispensa, which is a tall, clear glass tube filled with three liters of the house-brewed amber beer. On the ladies’ table were two or three empty dispensas; obviously they were celebrating something. When we asked them what, they said, Didn’t we know? It was “El día internacional de la mujer”—International Women’s Day. Which explained why so many of the tables were filled with celebrating women.

I don’t think I’ve ever heard anyone mention IWD in the states, but in some places—including Cuba—it’s a big deal. In China, Russia, and Vietnam, as well as Cuba, it’s a national holiday. Considering the countries that are so gung-ho about it, it must be a communist thing.

Anyway, we ordered another dispensa for the ladies as well as one for ourselves and then sat back and enjoyed the salsa being played by a very good band on the steps of the restaurant. At a table just in front of the band sat a grandmother wearing a yellow skirt and matching bandana on her head. She was with her daughter and young granddaughter. I’m guessing they were all celebrating International Women’s Day as well. 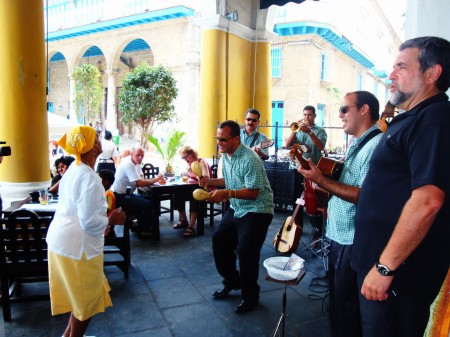 All three of them were swaying in their chairs, waving their hands in the air like they were flowers dancing in the sun, until finally grandma couldn’t stand it anymore and she started dancing in front of the singer and leader of the band. As you can see in the photo above, he dug it. He sang and grandma danced and everyone had a good time. Watch this video and you’ll see how, at about the two minute mark, grandma suddenly gets up and starts doing her thing. It’s lovely. And so very Cuban.