Take me to the river (drop me in the water) 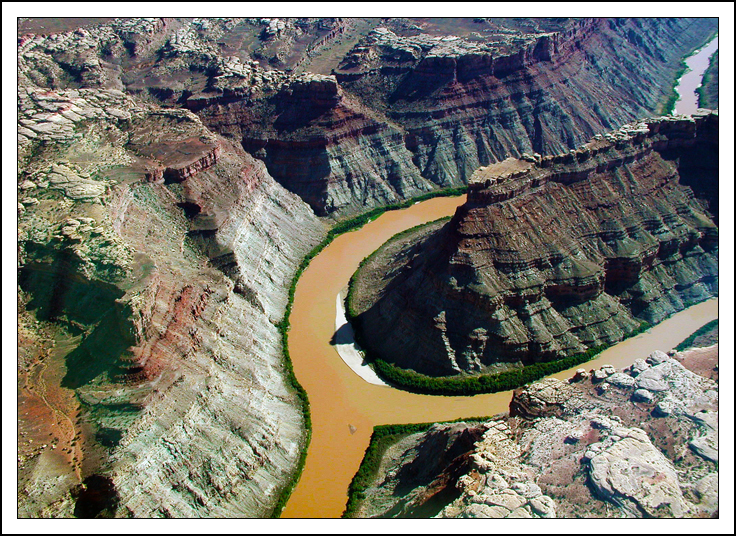 The Confluence of the Green and Colorado Rivers as seen from our plane. Photo by David Lansing.

What is this thing I have for following in the footsteps of other explorers? I keep going farther and farther back in time. All summer I’ve been reading about John Wesley Powell, a Civil War veteran who, at the age of 35, descended with nine companions in boats from Green River, Wyoming, to the mouth of the Virgin River in 1869, and for the first time made known the character of the interior of the long line of canyons and the general conditions of the country through which they carved.

And now, here I am. In Moab, Utah preparing to run Cataract Canyon where Powell and his men had more incidents than on any other part of their expedition, including the Grand Canyon, and experienced their greatest challenges. What I’m wondering is, Can it possibly be similar, in any way, to what Powell experienced 140 years ago? Has the Colorado River, tamed by dams and gentrified by easy access, lost its wildness?

From Wallace Stegner’s great book on Powell, Beyond the Hundredth Meridian:  “They named the bad stretch Cataract Canyon. The walls became lower, became smooth, monolithic, salmon-colored sandstone stained with vertical stripes of desert varnish. Through most of its course the canyoned Green and Colorado, though impressive beyond description, awesome and colorful and bizarre, is scenically disturbing, a trouble to the mind. It works on the nerves, there is no repose in it, nothing that is soft. The water-roar-emphasizes what the walls begin: a restlessness and excitement and irritability.”

And from Powell’s own journal: “We have an unknown distance yet to run; an unknown river yet to explore. What falls there are, we know not; what rocks beset the channel, we know not; what walls rise over the river, we know not. Ah, well! We may conjecture many things. The men talk as cheerfully as ever; jests are bandied about freely this morning; but to me the cheer is somber and the jests are ghastly.”

Flying into Moab yesterday in a small Cesna we flew low over the canyons to get a good look at our destination, but what we saw was only a thread of a river, green and muddy in low water. We did not see the rapids that for the first time gave Powell and his men a touch of danger and exhausting work, and we did not hear what is perhaps the most nerve-wearing accompaniment of any voyage in these canyons: the incessant, thundering, express-engine roar of the water which, in many parts of the canyons, never ceases, day or night. As Stegner wrote, “It speeds the heartbeat and deafens the ears and shakes the ground underfoot. It comes from every side, echoed and multiplied by the walls. A man’s voice is lost, shouting in it.”