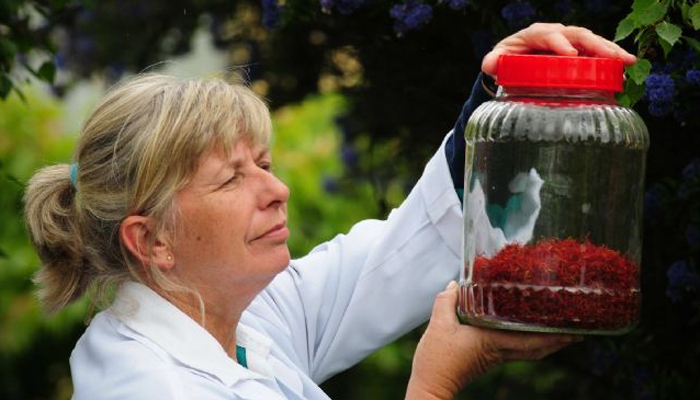 Nicky Noonan looking at about $7,500 worth of her Tas-Saff saffron.

Had another great dinner at Henry’s in the Henry Jones Art Hotel. A lovely, fragrant seafood soup made with lots of local fish and mussels and flavored with saffron. After dinner, Andre Kropp, the executive chef, came out and we talked about the meal over a glass of wine. I told him that, for me, what really made the dish, besides the fresh assortment of seafood, was the saffron. It seemed particularly delicate and flavorful. I asked him if it was from Spain.

I thought he was joking. Or that he meant it was “local” in the sense that he had picked it up from a local restaurant supplier. But he told me there was a crazy couple who had a saffron business up in the Huon Valley. I called up my buddy Sally Legosz of Herbaceous Tours and asked her if she knew anything about them. Of course, she knew them. Said she was planning on taking a cake out to the owner, Nicky Noonan, the next afternoon since it was her birthday and asked me if I wanted to join her.

When we arrived at Glaziers Bay, which is where the Noonan’s Tas-Saff farm is located, Nicky, who looks a bit like Penny Marshall’s younger sister, was somewhat frantically running about the place. She’d just gotten a call saying some Australian food inspector was coming by for an impromptu visit. The Tassies are crazy about quarantine laws and the like and since a big part of what happens at the Tas-Saff farm is the sorting and packaging of crocus bulbs, which are then parceled out to some 50 bulb growers throughout Tasmania, these inspectors, she explained, are very concerned about how clean your facilities are and making sure there’s no contaminated soil on the bulbs.

Anyway, Nicky took us inside the tiny little room where the spice is measured on carefully calibrated scales that are so sensitive that they can be affected by people just walking across the room, where she made tea while Sally cut into the cake she’d brought with her. I asked Nicky what made her decide to get into the saffron business.

Like almost everyone in Tasmania, she and her husband, Terry, were living a much different life elsewhere in Australia when they decided, as Nicky says, “To get as far away from Sydney and that life as we could. So we headed south to Tasmania with this vague notion of leading some sort of subsistence farming on a little handkerchief of land we’d bought.”

Then one day Terry, an accomplished cook, decided to make some paella and went shopping for saffron. “All he could find was a tiny little bottle of Spanish saffron for $15,” says Nicky. “We both wondered why on earth it was so expensive.” Terry wondered if they couldn’t just grow their own saffron. “We didn’t know at the time that saffron came from the dried stigmata of the crocus flower and that each flower only produces three tiny little stigmata. Or that it takes the stigmas from almost a quarter of a million flowers to extract one kilo of saffron.”

Twenty years ago, the Noonans imported 5,000 corms from Europe. It took three years before they got their first flowers. Which they harvested by hand. A decade later, they were harvesting nearly 120,000 flowers from their little plot and getting about a pound of saffron for the effort. “Crazy, right?” says Nicky. Which is why they developed a growers network throughout Tasmania to grow the flowers for them. Still, all the saffron ends up here at the Noonan farm where two seasonal workers carefully weight and package it before shipping it off to food geeks who clamor for it—like Chef Andre Kroop.