You don’t want to go toe-to-toe drinking Guinness with Liam Dolan. After all, in addition to owning the Claddagh Oyster House in Charlottetown, he’s also the proud proprietor of the Olde Dublin Pub where, last night, he stood me to a pint or two…or three. 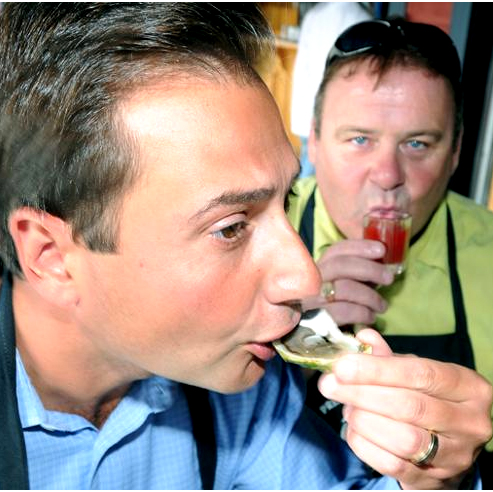 A customer samples oysters under the gaze of Liam Dolan, owner of the Olde Dublin Pub. Photo by Heather Taweel.

The only thing the Irish—even Canadian Irish—like as much as their Guinness is a good story. So when I commented on how well the Irish seemed to hold their booze, he told me this tale:

One day Liam was tending bar at the Olde Dublin Pub when a Texan walked into the pub and said, “I hear you Irish are a bunch of hard drinkers. I’ll give $500 American dollars to anybody in here who can drink ten pints of Guinness back-to-back.”

“Well,” said Liam, “I would have taken him up on the bet but I was workin’. But nobody else showed any interest. In fact, Paddy, who I thought for sure would take up the bet, actually left. Very disappointing.

“But fifteen minutes later, Paddy was back. He tapped the Texan on the shoulder and asked him if the bet still stood.”

The Texan said yes and asked me to line up ten pints of Guinness, which I did. Immediately ol’ Paddy tore into all ten pint glasses drinking them all back-to-back. Everyone in the pub cheered as the Texan sat there absolutely stunned. He pulled out five one-hundred dollar bills and says, “If ya don’t mind me askin’, where did you go for that fifteen minutes you were gone?”

Paddy pockets the bills and says, “Oh…I had to go to the pub down the street to see if I could do it first.”

By the way, I got a couple of comments yesterday regarding my inquiry into who came first to PEI—the Irish or the potato.

Said Fred, “I suspect that the hardy potato went with the French or British to PEI, where almost immediately the Irish followed and made an industry of it.”

I think Fred is right. According to the Prince Edward Island Book of Everything, “No one can put an exact date on when the potato was first introduced but it was sometime after the French were deported from the colony in 1758 and before 1771, the year that the governor of the colony reported the crop to be a ‘phenomenal success.’”

A book by Brendan O’Grady on immigration to PEI says that the first Irish settlements came over in 1763—after the potato was well established on the island—and that “it’s a myth that the Islander’s Irish settlers were largely refugees from the Great Potato Famine.”

In fact, says O’Grady, by 1850, the Irish comprised about a quarter of the Island’s population. “And almost all of them had come pre-famine.”

So now we know: First the spud, then the Irish. Followed shortly thereafter by the Guinness, no doubt.