The Black House in Chiang Rai 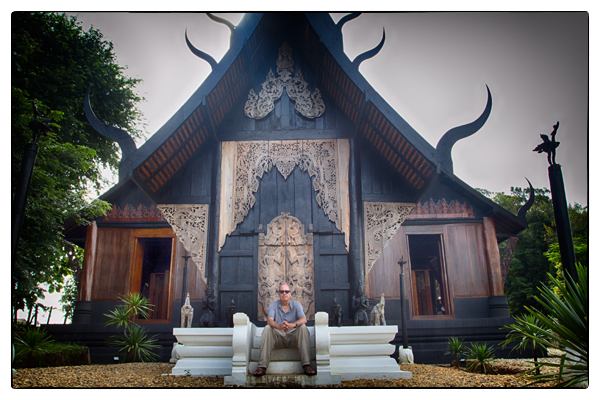 Sitting on the steps of one of the 40 structures that make up the Black House in Chiang Rai, Thailand. Photo by David Lansing.

My impression of Steve, who works for Thailand Tourism out of New York, is that he’s intrepid. Ride an elephant? Absolutely. Scale a treacherous temple’s exterior in the dark? Let’s do it. But when we get to the Black House (Baan Dam) in Chiang Rai, he walks inside, takes a quick look, and quickly walks out. When I ask him what’s the matter, he says, “I don’t like it. It gives me the creeps. I’m not going in.”

There’s no doubt about it: The Black House is eerie. Build by the Thai artist Thawan Duchanee, it’s like Buddhism meets Santeria. If the Black House was a movie I had to pitch, I’d say, Think David Lynch’s “Twin Peaks” set in Thailand.

The Black House is actually a collection of some 40 different structures—some large, some small—in diverse architectural styles, spread out amongst a green, peaceful garden that feels as ominous as a cemetery. I read somewhere that Duchanee (who turned 74 on Friday) explains his art by saying that it “explores the darkness lurking within humanity.”

When you first walk in to one of the largest structures, a Lanna-style vihara (a vihara now being a Buddhist monastery but originally meaning a secluded place in which to meditate, or a refuge used by wandering monks during the rainy season), what you notice is that it is big. And kind of spooky. And filled with such oddities as water buffalo skulls and cow horns. In the very middle of the room is a very long table—perhaps a hundred feet long—with snake skins, like table runners, down the middle. And at the very end of the table, is the snake’s head—leathery and puckered but still a bit scary. It’s difficult to say what Duchanee’s intent is. But it’s definitely a bit disconcerting. Particularly when you realize he has designed the room in such a way that even the slightest whisper carries from one end of the room to the other. The wind, rushing in from the open doorway, sounds like a thousand murmuring voices coming from the garden. No wonder Steve was spooked. 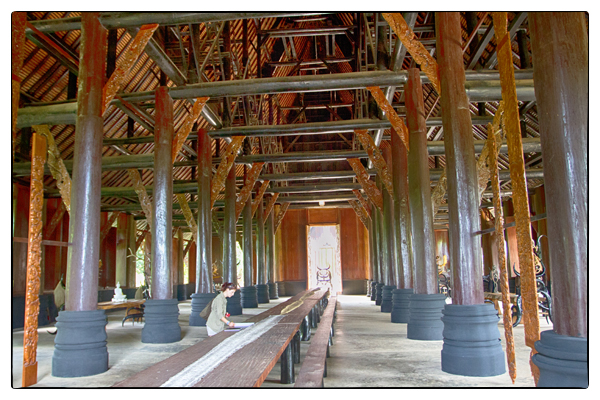 Snake skins run down the center of the long table in this vihara-like structure at Black House. Photo by David Lansing. 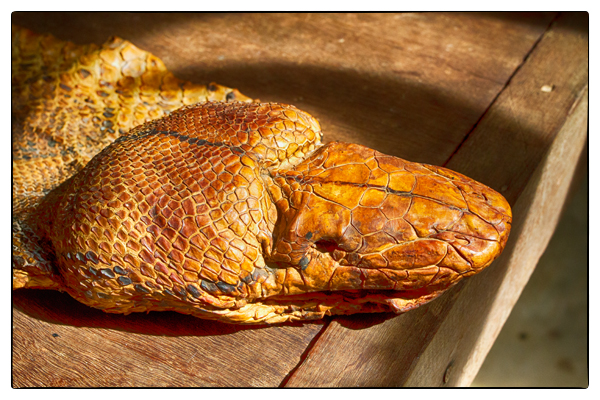