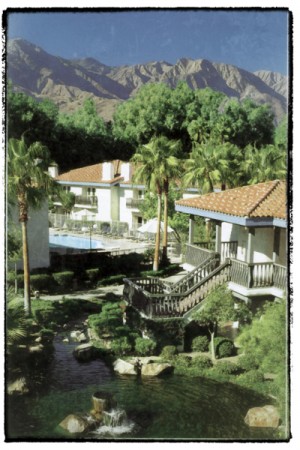 A postcard, from 1999, of La Casa del Zorro in Anza-Borrego.

From Tucson I drove west, out of the Sonoran Desert and into the Mojave, the smallest desert in the West, and then south to Anza-Borrego, two hours east of San Diego. There was a time, back in the mid- to late-90s, when Anza-Borrego was considered the new secret desert hideaway in California, during a time when Palm Springs was on the outs and nobody went to Death Valley anymore. In a period of about five years—from 1996 to, say, 2001—I was asked by a number of publications, including National Geographic, Los Angeles Magazine, Sunset, Westways, and the Los Angeles Times magazine, to write about this hot (literally) new getaway. And I’d always stay at La Casa del Zorro, partially because there weren’t a lot of options but also because I liked the desert glamour of the place.

It was relatively small (44 poolside rooms and 19 one-to-four bedroom casitas) and quiet and had a certain desert elegance to it (which was reflected in four-star, four-diamond rankings). Some very memorable things happened to me while staying at La Casa del Zorro. Some I wrote about; some I did not.

I had not stayed at the resort for ten years so I when I got in to Borrego Springs late yesterday afternoon, I was anxious to go out and see how the ol’ gal was doing.

The entrance was blocked off by a chain-link fence with a No Trespassing sign hanging on it. Seems in the intervening decade La Casa had died.

Back at my hotel, the classic Palms at Indian Head, I had a beer at their restaurant, the Krazy Coyote, and asked the bartender what the hell had happened to La Casa del Zorro. Seems I’d missed a lot since I was last there. About four or five years ago, the Copley family, which had bought the resort (then unimaginably called The Desert Lodge) in 1960, sold the troubled property for something like $2.5 million to a developer who owned a golf course with upscale homes on it just down the road. He renamed it Borrego Springs Ranch.

The guy put another $7 million into the property in a major renovation effort. Bad timing. The economy tanked and the resort was closed in January 2010. And it’s been closed ever since. Supposedly the whole 38-acre resort, including the freshly renovated rooms, many of which were never opened after the renovation, is on the market for $3.3 million, which seems like a bargain to me. If I was a Gordon Gecko-type I’d buy it in a heartbeat. Not to restore it as a resort but just to use as an incredibly secluded desert hideaway. A place where I could float alone in the resort pool late at night, watching falling stars streak across the inky sky.