The Festival at Sandpoint 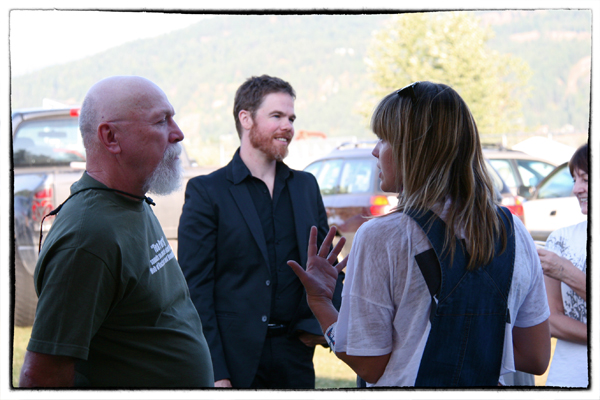 Josh Ritter at the Festival at Sandpoint. Photo by Katie Botkin.

A Letter from Katie Botkin in Idaho:

To imagine that North Idaho is all crazy right-wingers would do it a great injustice. There are also a lot of hippies and yoga enthusiasts and ski bums. And then there’s the North Idaho yuppie, the kind that spends a lot of money for a house on a lake and supports the local art scene. We even have our own music festival: the Festival at Sandpoint, in early August. It’s always a mix of different artists and genres; this year, I went to the Barenaked Ladies, Counting Crows, and Pink Martini. And I skipped Kenny Loggins.

Inevitably, if they’ve managed to spend the day there, the artists remark upon how wonderful the place is. “You know what’s wrong with Sandpoint?” asked the Barenaked Ladies. “Nothing.” This, of course, is because they’re seeing Sandpoint in the summertime, when it is just hot enough to make jumping in the large mountain-circled lake glorious.

Last year, I had managed to get tickets in the Festival’s VIP seating, and I kind of got used to it. So this year, I was disgruntled when I arrived up to an hour before the show and all the good non-VIP spots were taken. Everyone brings a blanket and a cooler full of wine, cheese and assorted fruits, and some even bring tiny tables and chairs. And then they sit there, bent over their food until the show starts.

I took my own blanket and picnic dinner to the sidelines, where I could see the profiles of the performers. For Pink Martini, however, I abandoned these and went to a work potluck behind the scenes. This is standard fare. Last year at our work potluck, before his performance, Josh Ritter joined us. I had gotten my friend Emma to come to this potluck with me, suspecting that this might happen but not letting on, and when she saw him approaching, her jaw dropped. “I think I’m going to pee my pants,” she said.

I managed to introduce them a few minutes later by telling Josh that Emma had first heard about him in Ireland, even though they are both from Northern Idaho. He thought this was charming.