The fortune teller on Granville Island 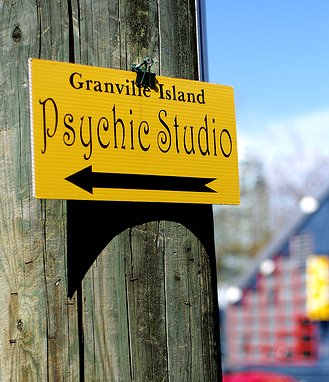 So I take the rainbow-colored toy ferry, the Aquabus, to the Granville Island Public Market on Saturday and it is like I’ve been transported to a scene from the days of King Arthur. There are jugglers in jester hats and a large bear of a man noodling Celtic tunes on a fife and everywhere are scrambling children wearing forest-green corduroy pants and knit hats that look like strawberries or bumblebees.

Inside the market, the aisles are crowded, the steamy air redolent of fresh seafood and ripe fruit and fragrant flowers. At Long Liner Seafood, I get half-a-pound of Indian candy—long strips of double-smoked sockeye salmon brined in brown sugar and salt, eating it in little nips and bites as I stroll about admiring the stands selling mounds of hothouse tomatoes and juicy rambutans and crunchy sea asparagus.

You know how it is when you walk around looking at food: You get hungry. So even though I’ve just had breakfast not more than two hours ago, I stand in line to buy a cup of thick oyster chowder at Stock Market, the soup place, and then take it outside on the steps of the landing, watching the buskers and the children rolling around on the grass and the silly little toy ferry, which looks like it should be piloted by Steamboat Willie, as it shuttles back and forth across False Creek.

As I’m finishing my chowder, a young woman comes by handing out flyers advertising a fortuneteller’s studio here on Granville Island. “Let me tell you your fortune,” she says. So I follow her to a green corrugated building beneath the old bridge. A yellow sign in the window says TAROT CARDS & PALM READINGS. I don’t believe in this stuff but I’m fascinated by it. One time in Sedona a wild-eyed hippie who looked disturbingly like Charles Manson read my cards and what he told me was so spot on that it made me nauseous.

Anyway, Chanel (that’s her name; pretty funny, huh) shuffles the cards and rearranges them and then I pick one.

“This is the Queen of Cups,” Chanel says. “She is a visionary and has extrasensory powers.” And then she flips over more cards and starts telling me how I have been here before at a time when I was at a crossroads in my life, that it had to do with two women, both of whom came to Vancouver to sway me, and how a decision I made then has had devastating consequences for one of the women.

“You destroyed a heart,” Chanel says, giving me the stink-eye.

Well, like I said. I just don’t believe in any of this. There’s no way a complete stranger can flip over a bunch of cards and know who you are and what you have done. Which makes it even more disconcerting that Chanel was right about everything she said.