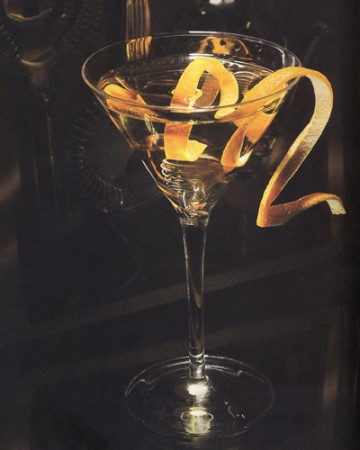 Last Friday, in writing about the Negroni cocktail, I mentioned that its precursor, the Americano, is what James Bond first orders in Casino Royale.

Some readers took me to task for this, pointing out that it is in this very book that the most famous of Bond cocktails, the Vesper Martini (named after the novel’s lead female character, Vesper Lynd), was created.

Right on both accounts. The Negroni is the first cocktail mentioned in the book but the Vesper is the most famous. Here’s how it reads in the book:

“A dry martini,” Bond said. “One. In a deep champagne goblet.”

“Just a moment. Three measures of Gordon’s, one of vodka, half a measure of Kina Lillet. Shake it very well until it’s ice-cold, then add a large thin slice of lemon peel. Got it?”

“Certainly, monsieur.” The barman seemed pleased with the idea.

Bond laughed. “When I’m…er…concentrating,” he explained, “I never have more than one drink before dinner. But I do like that one to be large and very strong and very cold and very well-made. I hate small portions of anything, particularly when they taste bad. This drink’s my own invention. I’m going to patent it when I can think of a good name.”

The novel goes on with Bond telling the barman, after taking a long sip, “Excellent…but if you can get a vodka made with grain instead of potatoes, you will find it still better,” and then adds in an aside, “Mais n’enculons pas des mouches.”

Kina Lillet isn’t the same stuff that it was when Fleming made up this drink in 1953 (it’s been reformulated) so I go with Lillet Blanc (which is also lovely on its own as an aperitif served on the rocks with a lemon twist). And if you want the same kick Bond wanted, go for Tanqueray instead of Gordon’s (which has a lower alcohol content than it did back then) and 100-proof Stolichnaya vodka. I’d also suggest forgoing the champagne goblet since the martini glasses most of us have these days are much larger than the little things Bond was drinking out of back in the day.

I would, however, stick to his advice on having just one before dinner. Otherwise you might end up like Dorothy Parker who famously said, “I like to drink martinis. Two at the most. Three I’m under the table, four I’m under the host.”