The girls at Grandvewe 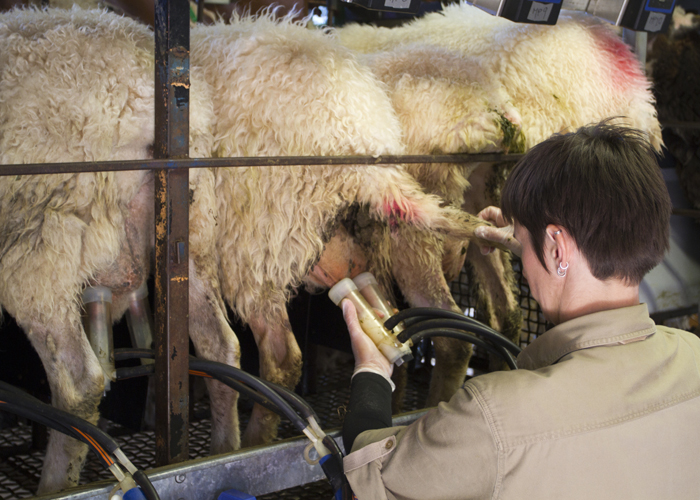 The girls at Grandvewe Cheeses getting drained. Photo by David Lansing.

The local cheeses Sally and I enjoyed at the Red Velvet Lounge in Cygnet were really luscious, particularly the Blue which was softer and creamier than a traditional Roquefort. As we were leaving, I mentioned to Sally how much I’d enjoyed it and she said, “Would you like to stop by the cheesery? They’re friends of mine.”

Sally’s friend is Diane Rae who, along with her husband, Alan Irish, and their kids, own and run Tasmania’s only sheep milk cheesery, GrandvEWE (get it?). Sally told me as we drove along from Cygnet to Birchs Bay, where the cheesery is located, that Diane used to be a financial planner in Queensland before moving to Tasmania ten years ago.

“I think she got fed-up with the whole corporate world,” Sally said. She told me that it was her husband who rescued “the girls.” I asked her who “the girls” were and she laughed and said, “Oh, that’s what they call their sheep. They’ve got names for all of them.”

Anyway, when we arrived at the cheesery, there was a bit of a stir. It seemed it was milking time at the cheesery. We followed a half dozen other people into the barn where dozens of ewes were lined up single file waiting to get on a shoulder-high platform to have their udders relieved. The girls were actually pushing and making loud noises trying to hurry the process. “It’s probably a great relief for the girls to get milked,” said Sally. “Must be uncomfortable for them.”

According to the young woman with multiple ring piercings in each ear who was draining the girls, they get one to two liters of sheep’s milk from each ewe from September through March, and it takes about six liters of milk for a kilo of hard cheese (they are known for their fine Pecorino) and about two or three liters for softer cheeses like the Blue Sapphire we’d enjoyed at the Red Velvet Lounge.

Diane wasn’t around but I did chat with her daughter, Nicole, who is the farm manager and wine maker. She said the cheese making business was a bit of an accident. Originally the family intended to start a winery at Birchs Bay (she started her career as a wine wholesalers in Queensland) and they were looking for a way to organically control the grasses between the rows. “We figured sheep would be best and then my dad heard about a flock that was being sold and shipped to the mainland. He rang the owners and said he’d buy them. ‘They’re Tasmanian sheep and they should stay in Tasmania.’ So that’s how we ended up with the girls. And then we had to start milking them and doing something with the milk. That’s how we ended up owning a sheep cheesery. It was just circumstances. Now I spend more time running the cheesery than making wine. Such is life.”