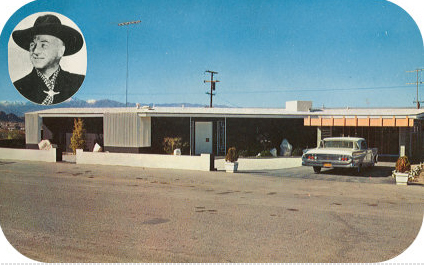 The Hoppy House in the early '60s.

Another thing I really like about The Mod Resort: it’s so close to everything. In fact, since I got here, I haven’t gotten in my car once (and, yes, I actually have left my room—on occasion). Sometimes in the morning, before it gets too warm out, I’ll just stroll aimlessly about the neighborhood. There are a lot of interesting homes out here. For instance, just a block away is Hopalong Cassidy’s old house (officially called the William Boyd House but known to locals as “Hoppy House.”).

Boyd, who always dressed in black and rode a pure white horse named Topper, decided when he built the house in the early ‘50s to stick with the black-and-white color scheme. So just about everything inside and out was either black or white. Wild, huh? 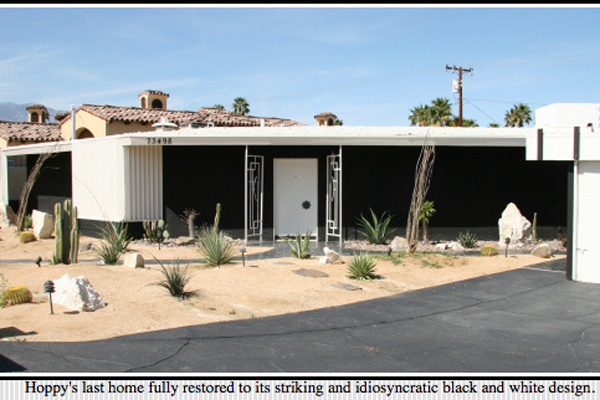 I got to see the house a few years back when the then-owner, a local contractor, had rehabbed the home before putting it up for auction. He’d repainted both the interior and exterior in Hoppy’s trademark black and white colors. There wasn’t much inside in the way of furniture since Hernandez had already cleared out a lot of the memorabilia—like the old saddles that Hoppy had turned into bar stools—for a memorabilia auction in the Bay Area.

Boyd and his wife, Grace, lived in the house until 1971. He died a year later at age 77. And what happened to the house? Well, it was sold at auction to a direct mail executive for $467,000. Stan Fedderly, who bought it, said after the auction, “I’m just a lucky guy. I didn’t think I was going to get it.”