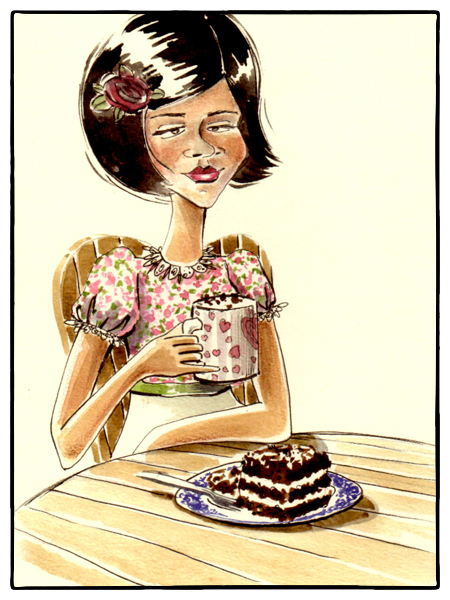 Here’s another selection from Life is Like That: Your guide to the Lebanese, this one titled “Daddy’s Princess.”

“Daddy’s princess loves cappuccino with extra chocolate on the top. Leena is certain she will marry a prince because her father says she will. She is 25. But a lot of her friends tell her she acts much younger. She is not sure if that is a compliment. She is dating Kareem. She loves him but her father says his prospects are not good enough and his parents are not like them. She spends her days pretending to do an MA (but complains that reading gives her bags under her eyes). She suffers from anxiety attacks and calms down by eating chocolate fudge cake. In the summer she lives at the beach where her family has a cabin and spends her day drinking diet Pepsis and eating chef’s salads. She will take over her father’s company. The most important people in her life are mummy and sister and dog, Sasha, a Pekinese. Kareem lectures her about having to have goals in life. She teases him by threatening to go out with Michael who is “sooo lovely, and sooo rich,” but she would never marry Michael. He is such a playboy. Still, he does drive the most delicious Mercedes, the one with the cute headlights, designed by Hermes. If Mike behaves, she might reconsider but he would have to show her he is serious by buying her the latest Vertu mobile phone. Now that would be a start. In the meantime, she will wait for the prince that daddy says will come along…one day.”