The Mexico Diaries: The bat caves 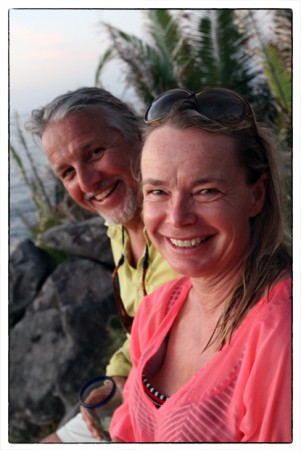 Chris and Malin Fletcher at the bat caves. Photo by David Lansing.

It’s always a full house at the Fletcher’s home in Custodio. At the moment, besides me, they’re also hosting several friends from Southern California and Chris’s cousin, Wendy, an artist who lives in Puerto Vallarta, who was here with a large posse of friends, just left this morning. In addition, Chris’s brother, Dave, and his wife are in residence next door along with several of their friends. So it’s a large group.

And the Fletchers aren’t the sort of people who like to just lie around the pool (although they do that as well). Yesterday when I arrived, everyone was getting massages by a woman who came up from Sayulita just for that purpose, and then later there was paddle-boarding up the estuary followed by a twilight walk along Turtle Beach. This morning there was a power walk into Platanitos before breakfast followed by a yoga session led by a woman from Alaska and then water aerobics. Not for me, of course. I mainly just hung around the pool and watched the pelicans fly by along the coast.

Late in the day, Chris announced that we were all going to the bat cave. You go there just before sunset and, he said, thousands of bats come out of the caves in the cliffs and chase the clouds of mosquitos that come out at night. So plans were made. Dave Fletcher made pitchers of margaritas. Chris made up some gin and tonics. Everyone doused themselves in bug spray and piled in to various SUVs and we drove a short distance through the jungle and then walked along a path that ended up at a bluffside platform about a hundred feet above the ocean. Below us, supposedly, were the bat caves.

We sipped our cocktails. We watched the sky turn purple orange. We complained when one or the other of us was bitten by a mosquito or no-see-um. And we waited. About ten or fifteen minutes after the sun had set, but while there was still light in the sky, the first bat appeared. Flying drunkenly over our heads, chasing bugs. And then a few more joined him. Eventually we saw a dozen or so bats. Some careening within feet of us as they chased down their dinner. A few of the bats almost banged in to Leah who decided she’d had enough. She started walking back to one of the cars. At this point it was getting dark so the rest of us decided to head back as well. Using the beam from a single flashlight to carefully make our way through the vines and overhang of the jungle. We hadn’t exactly seen thousands and thousands of bats. But it was kind of a cool experience anyway.